By Joe Messina, Special for  USDR

This week Hillary’s “misspeaks,” “misleads,” and “what difference, at this point, does it make” sagas continue to be in the news. And I mean, the REAL  news.

The news gods may be having a little change of heart. ABC, NBC, CBS, and, yes, even MSNBC have been asking questions and making comments about Hillary’s blatant disregard for the law and her failure to think things through when it comes to taking money from countries and questionable characters. Just when I thought the clouds were going to part and some sanity set in, in steps George Stephanopoulos, a very left-wing journalist, who, after speaking with the author of “Clinton Cash” basically said, “Move along nothing to see here.” His whole premise is that since we have no hard evidence that money changed hands for favors through the White House for the Clinton’s that all is well in  OZ.
Well, Mr. Stephanopoulos, all is not well in OZ. And you, sir, are a MAJOR part of the problem. It used to be that journalists gave us all sides of the issue and allowed us to draw a conclusion. They didn’t decide what the truth was and then paint a picture that would lead us to their  truth.

This same group of mainstream media people made many assumptions about George W Bush and had no problem accusing him while “misspeaking” their facts as  truth. 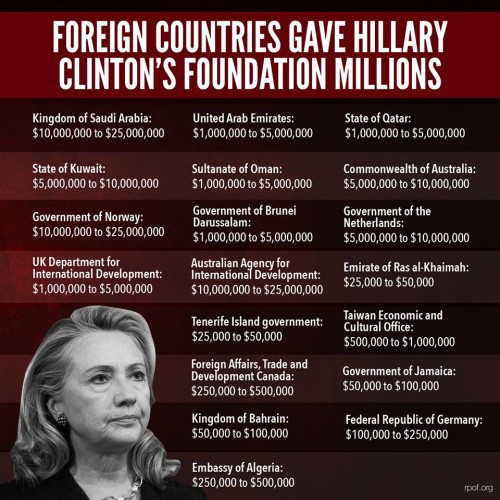 Mr. Stephanopoulos is floored that anyone would draw any conclusion of wrongdoing starting with Mrs. Clinton’s email issue. She simply made a mistake and since the president knew about it, all is well! Really? Turn the tables and see what would have happened if it was done by a  Republican.

Nothing “fishy” about Mr. Clinton getting on average $70,000 for speaking gigs before Hillary became Secretary of State. But after her appointment, all of a sudden he is worth $500,000 to $1.3 million per speaking gig. Did he take a speech writing class? Get better teleprompters? That’s not important. And no worries, most of those were events with some connection to  donors.

In the immortal words of Yul Brynner in the “King and I”… “iz a  puzzlement.”

Who else? What other legislator? What other past president? What other past legislator has received this kind of money from foreign entities? I’ll save you the time… NO ONE! Donations are made to Presidential Libraries for the purpose of upkeep and purchasing artifacts for the library, not the presidential families. But Georgie says you have nothing that actually ties to an agreement to provide  services.

A uranium (shell) company donated big bucks to the CFFTBOTC. Shortly after the donation, coincidentally, Mrs. Clinton changed her mind about the U.S. blocking the uranium mining deal and even encouraged such deals in some of her  speeches.

Then, there is the “re-filing” of past tax returns. Since it was brought to their attention that they forgot to include many, if not all, of the Canadian deal-based donations on their reports. Let’s pause here a minute. Hillary says she is a person of integrity and ethics. They have an elite team managing this foundation. How did they miss MILLIONS of dollars in donations with such an experienced team of employees at The Foundation? Not once, not twice, but 4 years in a row! Tax experts say it’s highly unusual for a foundation to refile this many years because of  omissions.

Well, not to worry. Hillary stepped down from the foundation’s board of directors this month but her husband, Bill, and their daughter, Chelsea, remain directors. I’m sure she will keep and arm’s length (or at least a bedroom length) away from Bill and the foundation. After all, she has always been honest and up front with us on all issues.  Right?

That whole, Benghazi debacle where she swears they never refused to send help. Oh wait… never mind! OK, then there is the “I turned over all the correspondence and emails pertaining to Benghazi and my term as Secretary of State” thing. Oh, wait… never mind. At least she only erased the emails that had to do with her daughter’s wedding, her aunt’s death, her yoga routines, and her personal transactions on the homes they purchased. Yup, all 33,000 of the personal emails. Oh, wait… never mind. OK then, we’ll just track down the entities and people she probably sent emails to and ask them for them… guess what? The first dozen or so refused to share. Can you see my shocked  face?

They’d have you believe that there is nothing to see here. Just step away from the  curtain!

You on the left pitched a fit and wanted to see Romney’s tax return because Mr Reid lied about someone telling him Romney didn’t pay taxes. You hypocrites have no outrage over it because as Harry put it. You  won!

This stench will continue to grow. She can’t keep lying to cover up all of these messes. And you honest Democrats out there (yes, there are honest ones) if you cover up for her (them) you are just as guilty of all the death and destruction they’ve left in their  wake.