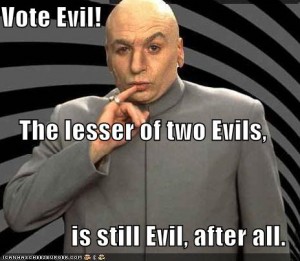 Every four years here in America, we are treated to, or maybe I should say “subjected to”, the privilege and right of casting our votes for the highest political office in The World, that being the President of the United States of America.  Oh yes!  Super Tuesday in November!  *applause, applause*

It is a grand event, replete with political pundits jacked-up on copious amounts of caffeine and adrenaline, ’round the clock TV coverage on cable news channels which run well into the wee hours of EST, and of course, those loyal supporters of the candidates who thanklessly toil and seek to peddle their candidate’s wares (virtues) outside of numerous voting locations throughout our America in that last ditch attempt at gaining one more vote.  It’s better than the Olympics, even, but only because the Chinese aren’t in attendance using 11-year old girls to hijack the medals in gymnastics.  (Unless you want to put that on ACORN as some new strategy of theirs that has yet been discovered.  Just sayin’…)

Yes, my friends, the ever magnificent ritual of electing a new (or maintaining an incumbent) American President is soon to be upon us once again.  Can you smell it?  I can.  It is a heady mixture of cheap after-shave, teeth whitener, hair spray, and the desperate sweaty endeavors of near rabid sycophantic followers.  (Okay, so that’s me, actually.  Don’t judge.)  The endless months and hours of campaigning, lying, manipulating, vilifying, lying some more, using politically-correct verbiage, and lying some more by the candidates, all culminate in one evening of thunder and rapid-breathed anticipation.  The opponents have made their cases.  The opponents have done their best.  It then falls on us, as American people, to decide their futures, and hopefully bring life back into the future of our nation.

For all the circus-like goings-on and the almost tangible excitement in the air, the brutal truth is this: every four years here in these Untied States of America, we are all forced, literally, to vote for, wait for it wait for it…. the lesser of the two evils.  *cue 1950’s horror movie starlet scream*  While this may frustrate some of you and even cause others to cuss at their computer screens, you know that which I speak of to be most true, however foul it may sound.  It always comes down to the GOP and the Democrat Party.  Every. Single. Time.  Well, at least in my lifetime it has.

Oh, for sure, there have been moments of that oddball third-party candidate who somehow inserts themselves into the spotlight of the nation, *cough* Ross Perot *cough*, even if on the fringes of said spotlight, but ultimately it always comes down to either “the conservative GOP” or “the liberal Democrat Party”.  Without fail.  Voting for “the lesser of the two evils” has become the norm, the cliched, the expected.  This should not be so.  It breaks my heart, really.  It breaks the hearts of many Americans who have no sworn fealty to either of The Big Two.

Even as I write this, I know it will inevitably come down to President Obama and some GOP frontrunner.  There will be no third-party or fourth-party candidates available.  By November 2012, these people will have been either forced to toss in their towels due to lack of funds, or due to lack of interest in their platforms.

The lesser of the two evils does so enjoy its stranglehold on America, doesn’t it?

Is there a solution?  Of course there is.  Yet like telling an alcoholic or a drug addict the solution to their problems, the majority of Americans simply will not hear it, and will continue to deny that there is a problem with American politics as we know them today.  — “I don’t have a problem!  You have the problem!  Now fetch me my remote, I need to watch FOX News/MSNBC!  And bring me some popcorn!  Argh!”

We are the greatest nation on this planet.  We have it all at our fingertips.  We have The US Constitution, a document that separates us from the great unwashed masses, much like soap and proper hygiene separates us from France.  We set the pace.  We are the ideal.  It is a travesty that every four years we are forced to vote the way we do, as if our hands are truly tied and our mouths are duct-taped shut, approaching the voting booths with that quiet resignation of a people whose spirits have been crushed and defeated.

November 2012.  I’ll see you there.  I’ll be the guy slowly shaking his head, muttering to himself.