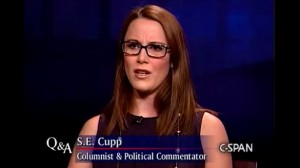 SE Cupp is a conservative favorite, and a liberal lightning rod.

M-F at 8 pm CST on http://1070knth.com, hosted by US Daily Review Publisher/Editor in Chief, Kevin Price.
Felicia Cravens, US Daily Review Contributor and political pundit, was a guest recently on the Price of Business to discuss the recent attacks by liberals against women.  This week alone Governor Nikki Haley (R-SC) was beaten, “in effigy,” as a pinata by an angry union mob.
RELATED: Does Obama Support Violence on Women?
In a separate story, political commentator SE Cupp was, in the words of Glenn Beck, virtually “raped” by Hustler Magazine through Photoshop.
Watch the interview in its entirety.
All opinions expressed on USDR are those of the author and not necessarily those of US Daily Review.