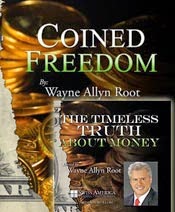 Monday the International Monetary Fund (IMF) joined with labor unions, big government progressives and other pro-wealth-redistributionists in nudging the U.S. government to mandate increasing the U.S. minimum wage from $7.25 to $10 an hour.
The IMF downgraded U.S. GDP growth by 40% this year to 2% this year, yet they still view increasing the U.S. minimum wage as part of the solution. But bestselling author and conservative spokesman Wayne Allyn Rootbelieves pushing wages up is part of the problem, not the solution.
“Like most progressive ideas, it sounds appealing to the public, which is struggling to stay afloat in today’s stagflationary U.S. economy, but in reality it’s a farce – a giant Trojan Donkey,” says Root.
“The truth is forcing millions of small, medium and big U.S. businesses to artificially raise wages and will end up costing everyone more money – but it will especially hurt lower and middle income families by raising consumer prices via the ‘hidden’ tax of inflation, which is anti-growth, anti-economic and un-American,” warns Root.  “Politicians love playing Robin Hood, but lack real concern for America’s poor. Instead they want wealth redistribution costs to be passed onto business owners and customers as an “invisible” tax. Free markets thrive on competition, not regulation,” explains Root, “and raising the minimum wage is a proven formula to further crush the U.S. middle class, which is the true goal of the Obama Administration, as explained in my new book, The Murder of the Middle Class” (July 2014, Regnery).
In Root’s new Timeless Truth About Money DVD and Coined FreedomSpecial Report, he explains why our money system and economy will either be “the builder or the destroyer of American civilization.”
“History confirms the rise and fall of nations and civilizations are always linked to the collapse of their money systems. All civilizations start out strong, but after about 200 years on average, one by one, they destabilized and destroyed their culture, economy and money system with unsustainable debt and rampant taxation,” Root says in The Timeless Truth about Money.
Root reminds Americans of the strong economic warnings from our Founding Fathers, such as Benjamin Franklin and John Adams:
“If the American people ever allow private banks to control the issue of their currency, first by inflation and then by deflation, the banks and corporations that will grow up around them, will deprive the people of all property until their children wake up homeless on the continent their fathers conquered.” -Benjamin Franklin
“All the perplexities, confusion and distress in America arise not from defects of the Constitution, not from want of honor or virtue, so much as from downright ignorance of the nature of coin, credit and circulation.” -John Adams
Root says today our nation is caught in an economic death spiral – unless ‘We the People’ can find and elect true statesmen willing to reverse these ominous economic trends:
1) Dependency: More Americans receive government entitlements than work full-time.
2) Joblessness: Over 100 million working-age Americans are not working – the highest in history!
3) Income Stagnation: The typical American family earns less today than they did back in 1989.
4) A Weak Dollar: The U.S. Dollar is in a 40-year downtrend, fast becoming an ‘IOU nothing.’
5) Global Uncertainty: Rising geopolitical crises, wild-cards and oil-wars in the Middle East.
Root says the first key to family survival is to begin moving yourself onto a “personal” gold standard. Wayne is offering audiences a free copy of The Truth about Money DVD and Coined Freedom Special Report online atwww.coinedfreedom.com.
All opinions expressed on USDR are those of the author and not necessarily those of US Daily Review.