By CIS, Special for USDR.

Just over two months ago, the Senate’s Gang of Eight introduced their far-reaching 844 page immigration bill. Drafted behind closed doors, many have struggled to learn the bill’s details. The Center for Immigration Studies has made available a copy of the now nearly 1,200-page bill, relevant CIS studies, testimony, research, and writings at:

As the bill likely comes to a final vote today, the analysis below should give all Americans pause. The proposed amnesty for 11 million and massive increase in legal immigration lacks any real enforcement and would have serious fiscal and economic implications. It is also loaded with slush funds and stimulus money. 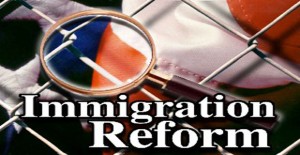 What is it about? The blog covers a Sunday morning “Al Punto” program on Univision, where Senators Marco Rubio (R-Fla.),John McCain (R-Ariz.), and Harry Reid (D-Nev.) responded to questions from host Maria Elena Salinas

Why is it important? The explanation from Gang of Eight member, Sen. Marco Rubio (R-FL): “Nobody is talking about preventing the legalization. The legalization is going to happen. That means the following will happen: First comes the legalization…”

What is it about? An analysis of S.744, which finds the bill would admit nearly 1.6 million more temporary workers, in the first year alone, than currently allowed.

Why is it important? If it passes, the Schumer-Rubio bill would shut out even more Americans from job opportunities, especially minorities, whether in STEM fields, agriculture, construction, or health care. Most of these temporary worker increases have no economic justification.

What is it about? When considering the economics of immigration, there are three related but distinct issues. First, immigration makes the U.S. economy (GDP) larger. However, by itself a larger economy is not a benefit to native-born Americans. Though the immigrants themselves benefit, there is no body of research indicating that immigration substantially increases the per-capita GDP or income of natives. Second, there is the fiscal impact — taxes paid by immigrants minus the costs they create for government. There is general agreement that less-educated, lower-income immigrants are a net fiscal drain; and more-educated, higher-income immigrants are a net fiscal benefit. Third, there is immigration’s effect on the wages and employment opportunities of native-born workers. Basic economic theory predicts that immigration should create a net gain for natives, but to do so it redistributes income from workers in competition with immigrants to workers not in competition and to owners of capital. Because the least educated and poorest Americans are the most likely to be in competition with immigrants, they tend to be the biggest losers from immigration.

Why is it important? Immigration makes the U.S. economy larger. However, for the native-born population immigration (legal and illegal) it is primarily a redistributive policy; it does not substantially raise the overall income of native-born Americans. As for the fiscal impact of immigration, the education level of the immigrants in question is the key to understanding their fiscal impact. It should be remembered that it is simply not possible to fund social programs by bringing in large numbers of immigrants with relatively little education. This is central to the debate on illegal immigration given that such a large share of illegal immigrants have modest levels of education.

How Many Amnestied Illegals Will There Be in Your State?

What is it about? Estimates of the likely state-by-state distribution of those to be amnestied should S.744 become law.

Why is it important? The adverse impact of the legalization program will fall heaviest on unemployed legal residents of the country, so the included table shows both the projected number of legalized aliens and the current number of unemployed, state-by-state.

What is it about? The pro-amnesty lobbyists who helped craft the Schumer-Rubio immigration bill included within the bill two “slush funds” amounting to $150 million that may be supplemented with additional taxpayer dollars for years to come.

Why is it important?  In addition to providing much flexibility to the grant recipients, the bill does not include any audit or oversight provision.

Promises, Promises
The track record on enforcement guarantees is not encouraging

What is it about? A partial list of the broken promises regarding immigration enforcement.

Why is it important? It suggests concern is warranted on the implementation of promises made in S.744.

Nearly 5 million new illegals and their children expected by 2023

What is it about? According to CBO, if S.744 passes, “the net annual flow of unauthorized residents would decrease by 25 percent.”

Why is it important? Although more border enforcement provisions have been added to the bill, the CBO report explains that the majority of future illegal immigrants will come from overstayed visas.

The Life of Julia, Amnesty Applicant

What is it about? In 2012, the Obama campaign released a slideshow titled, “The Life of Julia” which promoted agenda items being critical to the success of a hypothetical female named Julia. The Center has created a new version, which asks, “What would the amnesty bill look like from the perspective of an illegal alien named Julia?”

Why Less-Skilled Immigration and Amnesty Are so Costly to Taxpayers

What is it about? In the modern American economy those with relatively little education (immigrant or native) earn modest wages on average, and by design they make modest tax contributions. Because of their relatively low incomes, the less-educated, or their dependent children, are often eligible for welfare and other means-tested programs. As a result, the less-educated use more in services than they pay in taxes.

Why is it important? It is simply not possible to fund social programs by bringing in large numbers of immigrants with relatively little education. This is central to the debate on illegal immigration given that such a large share of illegal immigrants have modest levels of education. The realities of the modern American economy coupled with the modern American administrative state make large fiscal costs an unavoidable problem of large-scale, less-educated immigration which means unavoidable costs for taxpayers.

Hoeven-Corker Amendment – Long on Amnesty, Short on Everything Else

What is it about? Discusses the almost 200 page Hoeven-Corker amendment.

Why is it important? Even if 20,000 border agents are hired, and trained over the next decade, there is no assurance that they won’t be prevented from effectively controlling the border by elected officials who are beholden to lobbyists and big donors. The focus is totally on inputs, not results.

One in Seven U.S. Residents Would Be Immigrants by 2020

Why is it important? The increase in the foreign-born population will affect infrastructure, quality of life, and integration issues.

Five Myths about Amnesty for Illegal Immigrants in Senate Bill

What is it about? On close inspection, the hoops illegal immigrants are required to jump through do not amount to much. It discusses five claims about the requirements for illegal immigrants to earn amnesty – none are not what they seem.

Why is it important? Back taxes, fees and other requirements have been routinely used as a spoonful of medicine to help the amnesty go down.  It turns out that many of these claims are placebos.