Researchers in Equatorial Guinea may have discovered up to four new species of amphibians on Bioko Island. They believe that the island may be a kind of “ark” for amphibians where species have developed immunities to at least some of the diseases that are currently affecting amphibian populations worldwide.

The researchers, Patrick McLaughlin and Professor Gail Hearn, both from Drexel University, are part of the Bioko Biodiversity Protection Program (BBPP), a joint research effort by Drexel and the National University of Equatorial Guinea, with funding from the Exxon-Mobil Foundation. Ph.D. candidate McLaughlin and Professor Hearn began their research together in 2009, studying the distribution and abundance of frog species on Bioko Island for insight into specialization and analysis of potential threats to the habitat of vital importance and to the populations. 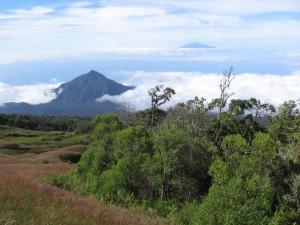 On June 28, 2012, they issued the results of their study, which confirmed the initial estimates of high diversity of amphibians on the island. The results included four or more new species and the presence of two others that were thought to only exist in the Continental Region and are in danger of extinction.

Overall, the study reveals a broad diversity that includes more than 35 species of amphibians divided into eight families. The results also confirm the presence on the island of chytridiomycosis, a disease that is fatal to amphibians elsewhere. The disease is widely extended on Bioko but not fatal, which suggests that the amphibians of Bioko have developed resistance to it.

The future analysis will assess in detail the most endangered species and develop specific plans for the preservation of each. This study also revealed that Bioko contains many rare and endangered species, along with a host of other endemic species, and could be considered a kind of “amphibian ark” for the conservation of West Africa.

“We generally thought if there were substantial morphological differences from any other known frog species, it might well be a new species,” said Professor Hearn. “In one case, the frog had been photographed and collected back in the 1960s, but the only specimen was lost in transit back in Europe, so it was never described to science.”

According to Professor Hearn, the new species that McLaughlin discovered were vetted by other West African amphibian experts at a recent international workshop in Italy, which gave her reason to believe in their authenticity despite the morphological variability often found in these frogs.  “We will be collaborating on the final species descriptions and will be including the still-pending DNA analysis,” she said.

Bioko Island is located just off the coast of west central Africa, 20 miles from Cameroon. It is home to Africa’s greatest concentration of endangered primates and over fifty unique species of plants. In addition, Bioko now has over 35 species of amphibians accounted for thanks to the work of McLaughlin and Dr. Hearn.

The Republic of Equatorial Guinea (Republica de Guinea Ecuatorial) is the only Spanish-speaking country in Africa, and one of the smallest nations on the continent. In the late-1990s, American companies helped discover the country’s oil and natural gas resources, which only within the last five years began contributing to the global energy supply. Equatorial Guinea is now working to serve as a pillar of stability and security in its region of West Central Africa. The country hosted the 2011 Summit of the African Union. For more information, visit http://www.guineaecuatorialpress.com.