Editor’s note Most presidents have struggled with the desire to “push the envelope” when it came to executive power.  The Obama Administration, however, has taken this desire to new heights.  The President was reported in US News and World Reports as saying where he could see how one could be “tempted” by dictatorship.  As President he has moved huge amounts of power from Cabinet members to “Czars,” which he has created at an unprecedented level. These Czars are largely without accountability from the Legislative Branch, unlike Cabinet officials.  He has consistently ignored the orders of the Judicial Branch on cases that were not adjudicated to his liking and has made it clear that he is interested in accumulating more executive power.  Now, he is seeing a trend in the courts that is against his health care program and he is going to use every means at his disposal to protect it, regardless of how questionable they 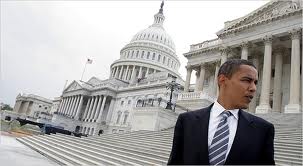 may be, as seen in this recent article in Fox News:

The Obama administration now faces a key legal and political dilemma — what to do about the recent decision from a federal appeals court that said the new law’s mandate that every uninsured American must buy health insurance is unconstitutional.

Many political analysts think the White House will try to delay Supreme Court consideration as long as possible.

“They definitely don’t want to see it go to the Supreme Court until after the elections,” said Kirsten Powers, a former Democratic operative and a Fox News analyst. “So my expectation is they would do whatever they can to slow walk this so that this does not get to the Supreme Court where possibly the individual mandate could be struck down which would be very