Understand first that communication is the sharing of ideas, your thoughts and/or your feelings on a specific topic or interest. This can be done through your speaking, your writing and sometimes your gestures and overall attitude (body language). A Great Communicator knows how to us 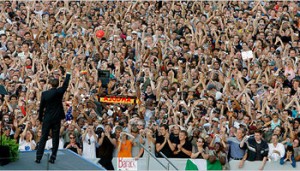 e the “Power of Persuasion” to influence those around them to follow their lead. Mankind has always communicated in some form.

Throughout history there have been those individuals that rose to the top of their profession or to the top of the conversation because they understood how to communicate in an extraordinary way. All great leaders have one thing in common: they are great communicators! Abraham Lincoln, Franklin Delano Roosevelt, Ronald Reagan, George Washington, Thomas Jefferson, Harry Truman, Woodrow Wilson, Theodore Roosevelt come to mind as Presidents that were very effective communicators.

Here are 7 lessons for great communication:

1. Have a strong knowledge base of the subject matter. Know the variables, yet focus on the undiscovered strategies. Keep it fresh and keep it real.

2. Don’t focus on the written words so much, tell a story that captures the essence of the moment and the vision of a strong solution.

3. Understand the issues/challenges, and do not sugarcoat the problems. People expect honesty and will applaud your efforts to cut through the rhetoric.

4. Real-life experiences lend credibility to your position. Paint a picture so that people can understand the message with ease.

5. No jargon and no beating around the bush. Use plain English, Spanish or German (whatever your language may be) and get to the point.

6. Define what you want people to do or expect from them. This becomes an opportunity to issue the ‘call for action’.

7. Sincerity can not be fudged. If you are trying to pull one over on your audience – chances are slim you’ll get away with it.

All of these points equate to confidence. The more confidence you have with the conversation, the more effective and believable you will be. In the political field great Presidents were defined by their communication skills. Presidents such as Harry Truman, Franklin Delano Roosevelt and Abraham Lincoln knew that above all else – communication is the key to impacting public opinion. Each had obstacles and differences with the American People, but each knew the power of the spoken word. President Ronald Reagan arguably was the most effective communicator this century. In fact he was often referred to as the “Great Communicator”. Even those who disagreed with his policies, knew and understood that he was confident and a leader – his vision and communication skills set him apart like no other!

When you think of Chairman and CEO of General Electric Jack Welch, Virgin CEO Richard Branson and Apple CEO Steve Jobs; you immediately think of them leading their respective businesses through the power of communication. Some leaders stand apart from the masses because of their ability to persuade others through the power of the spoken word. They know how to grab more attention, create headlines, close deals, but mostly they know how to excite the people around them. Each of us has the potential to be a “Great Communicator”, to rise above the noise and impact the conversation around us.