This week, the U.S. Supreme Court announced it will not hear oral arguments in Morgan v. Swanson, better known as the “candy cane” case.

“We are disappointed The Supreme Court denied review of this case,” said Hiram Sasser, Director of Litigation of Liberty Institute.  “We were hoping to finally put this issue to rest:  that government school officials should be held accountable when they violate the law and students’ First Amendment rights. No student should be subjected to religious discrimination by the government.” 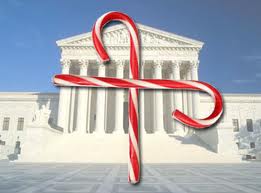 The “candy cane” case originated in 2003, when government school officials in Plano, Texas, banned students from handing out gifts with religious messaging, and prohibited an entire class from writing “Merry Christmas” on cards to American troops serving overseas.

For the past nine years, Liberty Institute has been representing the students and their families, contending that the government officials violated the students’ First Amendment rights. In September 2011, the U.S. Court of Appeals for the Fifth Circuit ruled that the government school officials did violate the First Amendment, but in a deeply divided court decision, the court narrowly granted the officials immunity. Late last year, Liberty Institute filed a petition with The Supreme Court asking it to review the 5th Circuit’s decision.

While The Supreme Court will not hear this part of the case, the case against Plano ISD continues at the district court and the court of appeals.

After nearly a decade in litigation thus far, the candy cane case has come to symbolize what many call “the war on Christmas” and has affected change throughout the nation, reshaping school district policies, influencing changes to state law, evoking questions about religious expression in schools and forcing the examination of student’s First Amendment rights.

According to a statement, “Liberty Institute is a nonprofit legal group dedicated to defending and restoring religious liberty across America — in our schools, for our churches and throughout the public arena. Liberty’s vision is to reestablish religious liberty in accordance with the principles of our nation’s founders. For information, visit www.LibertyInstitute.org.”