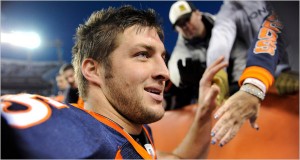 Okay, I have to talk about Tim Tebow. Why? Because I’ve been watching Tim Tebow since his Florida days. I am a Florida Gator and I have been since high school. A bad day in Gainesville is better than a good day in Tallahassee. Cut me, I bleed orange and blue. This is a difficult premise in scarlet and grey Ohio. It was never more difficult when Ohio State and Florida played in the BCS. Ohio State fans cussed at me, physically bumped in the store and ignored me in conversation from time to time when I would proudly display my colors. I was never treated that badly by a Noles fan. Oh…by the way, it’s THE University of Florida.

But back to Tim Tebow. Understand that not every player makes the leap to the professional leagues. And Tim Tebow has his struggles as a professional player. He cannot do everything he did for himself when he played in college – he could be his own lineman. In the pros, the players are bigger and better. But give him a chance and he will exploit a chink in your defensive armor for a touchdown. He will cradle that ball and put his shoulders down and move it if necessary. As I listened to his presser the other day, I was so happy to see that he is still the Tim Tebow we came to know and love at Florida, not that I doubted he would ever change. He thanked everyone else for making him look good. He singled some players and coaches by name. He was gracious and charming. In a sport that epitomizes manliness (hockey coming in a close second only because there’s no legal tackling), he will redefine what being a man means. It does not mean thuggish, showboat behavior after every play; it does not mean taking verbal or gesturing swipes at your opponent when they are down. It means getting back up and looking wordlessly at your opponent and lining up to do it all over again. Tim was cool and calm under the pressure of the reporter’s rapid fire questions. He smiled and patiently answered every question. It was about the team and Tim Tebow knows he is not the whole team.

Why did we never question Kurt Warner’s faith? Did the Minister of Defense, Reggie White, ever face such spiritual scrutiny? Has Drew Brees been raked over the coals for his testimony in Christ? It is because people just don’t like Tim Tebow perhaps. It is because you all are tired of the SEC winning every BCS title? Or because he’s charming, handsome, gracious, and he can play little football? Sure – he does have some maturing to do . He wears his emotions on his sleeve. He is fun to watch. When he gets married, he will break thousands of hearts. His faith is strong and in your face, just like his playing style. And we need more men of faith; true men of faith who are willing to take the hits for their team in the name of God. This is sorely lacking in today’s culture. If your sons need a sports figure as a role model, you could much, much worse than the work and playing ethic of Tim Tebow. Tim, I hope you continue to excel in football and in life. I hope you will take to a knee for your successes and failures. God gives us what we need when we need it but only if we seek what He wants for us. For now, Tim Tebow is a witness to the sporting world of a man, who with God, finds all things possible.