An on going series. 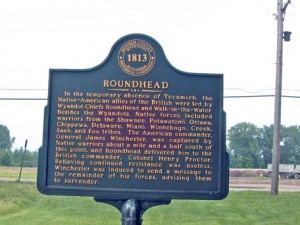 In Monroe, Michigan is the River Raisin National Battlefield. It was named as the 393rd park in the National Park System in 2010 and commemorates one of the most brutal episodes of the War of 1812 – the Battle of the River Raisin (also known as the Battle of Frenchtown). The conflict that produced the conditions for the massacre existed prior to the war – Tecumseh’s ambitions for a large Native confederation and the British control of the fur trade around the Great Lakes. “Remember the Raisin!” was the rallying car for militia troops for the remainder of the war after the brutality witnessed. The brutality and retaliation happened on both sides and long before official hostilities were declared.

The Americans wanted the British to finally live up to the Treaty of Ghent that ended the American Revolution and abandon the forts in the Northwest Territory. That territory encompassed Ohio, Michigan, Indiana, and part of Illinois, Wisconsin, and Minnesota. Continual raids on settlements in Ohio, Michigan and other parts of the territory proved that the British were supplying the Native groups with weapons as the arms were dropped in retreat or found with the dead. Even the arms were stolen, British arms were accessible. Americans were incensed; the British had no right to stir up trouble and interfere with American settlement. They weren’t alone; the French population was pushing out across Ontario and moving into the western and southwestern areas of the largest province. Native groups were under pressure to settle treaties and continue to move westward. Small forts built on the frontier were hard to man and even harder to keep supplied. In times of attacks, they were the only safe havens and supplies were often stretched very thin. So the pressures on the frontier were many.

WHAT IS THE NEXT ENTREPRENEURIAL CRAZE? EASY ENTRY, GREAT OPPORTUNITY

The surrender of Detroit and all of Michigan territory, by General William Hull in August, 1812 to General Isaac Brock and Tecumseh, placed the region under the control of the British. Many French and American settlers had friends and family on both of the border and urged the Native groups especially allied under Tecumseh to remain at peace. They did not relish the possibility of fighting people they knew well. The residents of Frenchtown were open to raids by the British and Natives alike now. The American army, which was under the command of Brigadier General James Winchester, had been ordered westward by General William Henry Harrison, and had dug in at the Maumee River rapids (Perrysburg, Ohio) and was awaiting 600 volunteers as reinforcements from Colonel Lewis.

In January, 1813, Kentucky militiamen, British regulars, Canadian natives and Native warriors would clash in a large field near Monroe, Michigan, just over the border from modern Toledo, Ohio. The two-day battle would take hundreds of lives. Canada relied on Great Britain for its defense. The United States had a very small standing army and still relied on the militia. Militia units made of hardy Kentuckians would serve at this battle. They were expansionist and saw the British and Native groups in the way of the westward movement in America. On January 22 and 23, 1813, British regulars and their Native allies led by Tecumseh (especially the Potawatomie) and Winchester’s American regular army and Kentucky militia battled for territory along the western edge of Lake Erie. Winchester’s troops were not adequately armed to fight the better supplied, better trained British regulars, as messenger Captain Nathaniel Hart found as he brought a message to Winchester from General Harrison. General Henry Proctor, hearing of the massing of American troops at Frenchtown, brought more troops and additional cannon from Fort Malden in Amherstburg, Ontario. This would not be the first time the British fort would play a significant in the battle for control of the western frontier.

On the morning of January 23, the British guarding the wounded left. As Tecumseh and his warriors moved through the area, houses were plundered and burned and over 60 unarmed Americans soldiers that lay wounded on the field were massacred by Tecumseh’s warriors. When injured and essentially helpless soldiers are slaughtered on the battlefield by any force, it is a massacre. This fueled the desire for blood revenge and exacerbated the already tense situation along with border with Canada. As Tecumseh and his warriors retreated into Canada, Americans were incredulous that the British would harbor him. But the British played their Native allies keenly and, in turn, their Native allies played them. For the time being, Tecumseh and the coalition of Potawatomie, Wyandot, Creek, Miami, Shawnee and others were “safe”. They knew their world was changing. They were being pushed westward by two forces and they decided to choose the one power that might somehow preserve their way of life, even if it was not the same before the colonizers showed up.

The area of Monroe, Michigan was abandoned by its citizens. Some moved south toward modern-day Perrysburg and the relative security of Fort Meigs for several months until late September, 1813, when the Kentuckians moved back in in the wake of the American naval victory on Lake Erie and pushed the British and Natives back into Canada and defeated them at the Battle of Thames. It was years before settlement returned to the area however; the damage had been done. For the rest of the war, “Remember the Raisin!” would be a rally cry for American troops. Today, this site is a national battlefield. While not the spectacular visage of Manassas or Gettysburg, it is instructive to understand the complexity of relations between the United States and Great Britain and, even in a broader context, Canada. Our long-standing maintenance of an undefended border is a result of both war and peace. Battle of River Raisin, the Battle of Lake Erie and the Battle of the Thames played a crucial role in establishing a permanent American presence and spurring diplomatic solutions to the on-going border issues on the western frontier.