Nandipati was named the Scripps National Spelling Bee Champion in the 13th round after correctly spelling the word “guetapens,” which is defined as “an ambush, snare, or trap.” 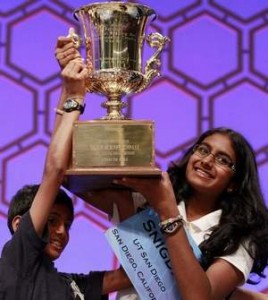 This was the second consecutive Scripps National Spelling Bee in which Snigdha competed. She tied for 27th place in last year’s Bee.

The preliminary and championship rounds of this year’s Bee were broadcast live on ESPN. The primetime broadcast lasted seven rounds.

The spelling competition began Tuesday with 278 competitors who qualified to compete in the Scripps National Spelling Bee by winning locally sponsored bees in their home communities.

“Congratulations to Snigdha, who captivated the world by mastering some of the most difficult words in the English language and thrilled us all in becoming the 2012 national champion,” Boehne said. “The Scripps National Spelling Bee is truly a national treasure and we take great pride in seeing these young leaders rise to the occasion. They are rewarded for their dedication and commitment to improving their spelling and language. Those skills will last them far beyond this academic contest.”

With more than 11 million spellers starting at the local level, the Scripps National Spelling Bee is the nation’s largest and longest-running educational program of its kind. The competition is administered on a not-for-profit basis by Scripps, based in Cincinnati. The majority of local spelling bee sponsors are daily and weekly newspapers.

The competition was held in the Gaylord National Resort and Convention Center in National Harbor, Md. Round-by-round results can be reviewed at the Scripps National Spelling Bee Web site, http://www.spellingbee.com/.

The national champion receives a $30,000 cash prize along with the trophy from Scripps; a $2,500 U.S. savings bond and complete reference library from Merriam-Webster; a $5,000 scholarship from Sigma Phi Epsilon Educational Foundation; $2,600 of reference works, including the Final Print Edition of the Encyclopaedia Britannica, and a lifetime membership to the Britannica Online Premium from Encyclopaedia Britannica; and an online language course and Nook Color from Middlebury Interactive Languages.

All students will receive varying amounts of cash prizes depending on where they finish in the academic showcase.