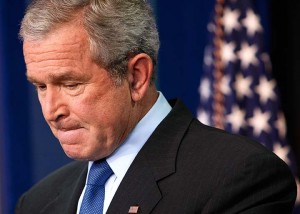 He spent how much on long distance?

Taxpayers picked up the tab for Bill Clinton’s $579,000 office rent and George W. Bush’s $80,000 phone bill in 2010, according to a report Tuesday that notes Americans ponied up more than $3 million of expenses for the country’s four surviving former presidents.

George W. Bush may have raked in $15 million from speeches alone in 2010, but he still expensed $1.3 million to taxpayers, including $80,000 in phone bills, ABC News’s Jonathan Karl reported in “Spinners and Winners.” And Bill Clinton also made it big on the speech circuit — bringing in $10 million — and billed more than $1 million in expenses to taxpayers. Jimmy Carter, meanwhile, received over half a million in expenses, including $15,000 for postage, and taxpayers also paid $830,000 for George H.W. Bush.

Rep. Jason Chaffetz (R-Utah) is proposing a bill to end taxpayers’ funding expenses for any ex-president who brings in more than $400,000 per year. Under his proposal, presidents would receive a $200,000 annual pension and $200,000 in annual expenses if they make less than that combined, ABC News reported.