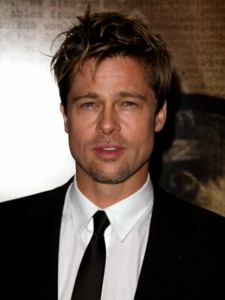 Brad Pitt leads the pack in bringing in the money.

Brad Pitt has been voted the Top Money-Making Star of 2011 in Quigley Publishing Company’s 80th Annual Poll of Motion Picture Exhibitors. This is Pitt’s sixth appearance in the Poll, but his first win. Exhibitors felt Pitt was responsible for more traffic to theatres than any other Hollywood star based on his performances this year in “Moneyball,” “The Tree of Life” and “Happy Feet Two.” (voice)

The Quigley Poll, conducted each year since 1932, is an annual survey of motion picture theatre owners and film buyers, which asks them to vote for the ten stars that they believe generated the most box-office revenue for their theatres during the year. It has been long regarded as one of the most reliable indicators of a Star’s real box-office draw because the selections are made by professionals whose livelihood depends on choosing the films and actors that will bring audiences to their theatres. The Quigley Poll appears annually in Quigley Publishing Company’s International Motion Picture Almanac and on our web site:www.quigleypublishing.com. Both list the results of all the Polls since Marie Dressler, Janet Gaynor and Joan Crawford took the top three places in 1932.

George Clooney placed second this year based on “The Ides of March,” where he was also the Director, Producer and Co-writer and “The Descendants.” Johnny Depp, last year’s winner, made it to #3 this year with 2011 roles in “Pirates of the Caribbean: On Stranger Tides” and “The Rum Diary.”  Depp has placed in the poll seven times as has this year’s #4, Leonardo DiCaprio, who starred in “J. Edgar.” Matt Damon, #5, had a very busy year with “Contagion,” “The Adjustment Bureau,” “Margaret” and “We Bought a Zoo.”

2009’s winner, Sandra Bullock, placed #6, which marks her fifth appearance in the Poll. She first placed in the survey in 1995. There were two first-timers this year, Bradley Cooper #7 and Ben Stiller #10. Bradley Cooper was in “The Hangover Part II” andBen Stiller was in “Tower Heist.” Robert Downey, Jr. was #8 on the strength of “Sherlock Holmes: A Game of Shadows” and Meryl Streep was #9 as ‘The Iron Lady” and is in the Top Ten for the fourth time.

Tom Cruise has not placed in the Poll since 2006 but he has been in the Top Ten 20 times since 1983, and been voted number one the most of any actor – seven times. Tom Hanks, Clint Eastwood, Burt Reynolds and Bing Crosby have all won five times. Clint Eastwood has been in the poll 21 times starting in 1968. Currently, Exhibitors appreciate him more as a Director that brings audiences to their theatres. John Wayne, Doris Day and Shirley Temple each finished first four times, but John Wayne was voted one of the Top Ten Money-Making Stars an astounding 25 times from 1949 to 1974.

Exhibitors were also asked to name the Stars of Tomorrow for 2011: one actor and one actress who they feel will be Top Money-Makers in the years to come. The 2011 winners are Rooney Mara who played Lisbeth Salander in “The Girl with the Dragon Tattoo,” and Jonah Hill who had a breakthrough performance in “Moneyball” and starred in “The Sitter.”