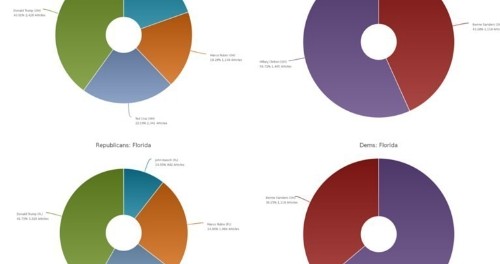 By  LexisNexis, Special for  USDR

Predicting the outcome of this election is like trying to sneeze with your eyes open; it can’t be  done.

As the candidates prepare for primaries in Ohio and Florida – two big battleground states whose delegates are up for grabs on March 15 – media coverage, polls*, and social media continue to predict different  outcomes.

In Ohio, for instance, John Kasich has drawn nearly even with Donald Trump for his share of votes – a mere two-and-a-half percent separates Ohio’s governor from the business tycoon. Yet Kasich is third in media coverage of the Republican candidates, securing less ink than both The Donald and Ted Cruz and beating Marco Rubio by just over one percent share of voice. (You would think that in his home state, Kasich would have more of a media  following!)

In Florida, the share of vote and share of voice are closer. Trump has 40 percent of the vote and 43 percent of the media coverage, for example, as noted in the chart below. The same is true of the Democratic candidates. Is this an indication that Florida media is just more tuned in to what voters want to read about and watch? Or is this just a happy  accident?

Election 2016 has already produced its fair share of surprises, thanks in part to unpredictable polling, wild media coverage, debate antics and candidate histrionics. For a full breakdown of media coverage from the election cycle, visit the LexisNexis Biz Blog or connect on Twitter  @LexisNexisBiz.