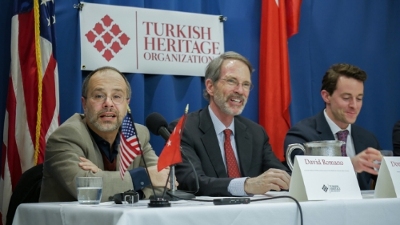 Douglas Hengel, former Assistant Secretary of Energy, Sanctions, David Livingston, Associate at the Energy and Climate Program at the Carnegie Endowment for International Peace, and David Romano, Professor of Politics in the Middle East at Missouri State University discussed the evolving energy politics mainly between Turkey, Russia and  Iran.

Experts indicated that they predicted a decline in Turkey’s reliance on Russian natural gas due to the strategic expansion of its supply sources.  Former Assistant Secretary of Energy Hengel pointed out that deterioration of political and economic relations between the two countries, especially at a time when oil prices were at historical lowest, was making Russia vulnerable. Hengel indicated that any action to cut off Turkey’s energy supply would send a critical signal to Europe and eventually reinforce them to diversify their  sources.

Turkey as a Gas  Hub

Turkey’s geographic location makes it an ideal hub between the energy rich east and the energy dependent west. The Trans-Anatolian Natural Gas Pipeline (TANAP), that runs from the Caspian Sea in Azerbaijan through Turkey to Italy, is a good example. Hengel argued that geography alone was not going to help Turkey and Turkey needed to revisit its energy structure and legislative reforms to achieve its goal as an energy  hub.

Livingston did not believe it would be possible for Turkey to become a true energy hub until after 2025. According to Livingston, the key for Turkey will be to transition from a formative hub to a mature hub with highly liquefied gas and a liberalized energy  market.

Speakers agreed that following the lifting of economic sanctions, Iran will be a critical energy supplier. However, there were disagreements particularly on whether Iran’s natural gas reserves could be a serious source of energy for Turkey. Hengel argued thatIran would primarily rely on natural gas to boost its oil  extraction.

Ramono noted that in addition to expanding its supply, Turkey needed to find cheaper alternatives such as the Iraqi Kurdistan. Ramona indicated that the political rift between Turkey and Russia negatively impacted Turkey’s energy ties to  Iraqi-Kurdistan.

The Turkish Heritage Organization (THO) is a non-profit organization founded to promote discussion and dialogue around issues of importance in the U.S.-Turkey bilateral relationship as well as Turkey’s role in the international community. Learn more at:http://turkheritage.org/ or on Twitter  @TurkHeritage.