The British Bikers Association (http://www.britishbikersassociation.org/) has learned from “Mr Pothole” Mark Morrell that the British road network may be privatised.

Mr Pothole stated, “Having examined the publication ‘Action For Roads – A network for the 21st Century’ dated July 2013, I feel that there are a number of good points made in the paper and maybe the start of a different way of managing ‘our road’ network in the future. 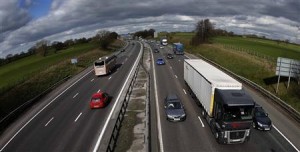 “The government states that there will be a consultation later in the year on turning the Highways Agency into a publicly-owned company which sounds all well and good; however, who will they consult?

“Is this the start of privatisation via the back door of the major road network that we the taxpayers paid for in the first place? It would seem to me to be the foundations for doing so in the future.

“During the consultation period, we the road users/ taxpayers must make it clear to the government that we will not pay tolls and/or pay per mile to use ‘our roads’ at any time in the future; this needs to be covered in the legal framework if/when it goes ahead.

“The ‘Motorists Champion’, who they say is to provide a strong voice for all road users, hold the company to account and deliver the best performance and value for roads users, ‘must have teeth’ to do so. More like a Regulator, such as in the power and water industry with these types of powers. Customer feedback should be built in as a key performance indicator and within the service level agreements, etc. – incorporating major penalties if they fail to deliver good performance.

“However, the key thing for me is the lack of proper funding for the backlog of road maintenance repair needed in the UK as a whole. I feel that it does not address the issue of potholes we currently have and will grow in the future if something does not change. They like to use BIG numbers so we normal folk think they are doing something at last.”

Mr Pothole went on to say:

“They cannot even get the sums right! The ‘Action For Roads’ paper talks about £12bn over six years for road repair and maintenance, while the Spending Review total commitment is £10bn over the same period. Where is the £2bn coming from? Not that it is a lot of money!

“Furthermore, when you dig down into the detail the increase in funding for local councils is like ‘peeing in the sea’. The increase in funding in the Spending Review ‘Investing in Britain’s Future’ on current road maintenance is about a 0.13% increase in spending against the total Asset value. It is like someone spending £18 per year to keep a vehicle worth £3,000 on the road now increasing it to £21.90 per year. We all know that the state of ‘our roads’ and see them each day getting worse, with not a lot happening to them. There are a few pothole repairs and surface dressing on some larger roads being carried out at present, but nowhere near the level of work needed. The estimated backlog of road maintenance in the UK is in the order of £20-30 billion and increasing each day it is left. The ageing, much used and loved road network asset is one of the most valuable assets the country has and it is time that government funded it correctly. As road users we pay in well over £50bn a year to government and yet only £4.5bn (9%) of this is spent repairing ‘our roads’, so where does the rest go?

“The bankers’ bonuses for last year were in the order of £5bn, more than is spent on road repairs and maintenance. I am not against Overseas Aid, however, currently the UK government spend £7.75bn (15.5%) on this each year.

“The government wants to be a big player in the G8 club; however ‘our roads’ are falling to bits in some cases.

“It is time for action, not glossy papers with spin in and not a lot else. We keep hearing about cuts and how hard it is, but the government seem hell bent on putting £10s billions into a faster railway line that not many people will use or want. If all the money they were going to use on this was put into road repairs and maintenance over this time it would assist in:

“Clearing the backlog of much needed work on ‘OUR ROADS’.

“Making the roads/footpaths safer for all.

“Reducing the number of accidents on the roads and the human cost that goes with them.

“Putting much needed money into the economy, helping small- and medium-sized businesses (for which £100s billions was put into the banks to do but did not).

“Reducing the estimated £4.1bn cost due to badly maintained roads.

“Giving people in the country a sense of value that something is being done at last about ‘OUR DECLINING ROADS’.”