This from the Hill.com: 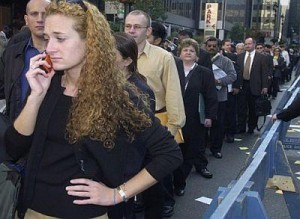 First-time jobless claims increased unexpectedly for the second straight week as the labor market continues its choppy and slow recovery.

Weekly applications for unemployment benefits rose by 6,000 for the week ended Nov. 26 to a seasonally adjusted 402,000, from the previous week’s revised figure of 396,000, the first jump above 400,000 in three weeks, the Labor Department said Thursday.

The four-week average, a less volatile measure than the weekly figure, was about the same as last week, 395,750, an increase of 500 from the previous week’s revised average of 395,250.

Jobless claims have been steadily declining for the past two months and they hit a seven-month low two weeks ago even has employers remain reluctant to hire.

The report comes on the eve of the release of the Labor Department’s November figures — which are projected by economists to come in at around a net increase of 125,000 with the unemployment rate staying at 9 percent.

The economy added only 80,000 jobs in October but August and September figures were revised upward to show solid gains.

ADP released a report on Wednesday showing a montly gain of 206,000 private-sector jobs — governments have been cutting jobs, dragging the overall number down.

Economists suggest that claims need to fall below 375,000 before the job market can be considered healthy — applications fell to 375,000 in February and stayed below 400,000 for two months, before hitting an eight-month high of 478,000 in April.

Meanwhile, there are other positive signs of the economy’s recovery although it remains sluggish.

Retailers had a record start to the holiday retail spending season with record sales in stores and online while consumer confidence rose in November.

Consumer spending represents 70 percent of economic activity and is a key factor to accelerating the recovery.

The number of people continuing to receive jobless benefits for the week ended Nov. 19 increaesd by 35,000 to 3.74 million, the Labor Department said.

Those who have used up their 26 weeks of state benefits and are now collecting federal emergency and extended payments increased by about 69,500 to 3.52 million in the week ended Nov. 12.

The total number of people claiming benefits in all programs for the week ending Nov. 12 was just more than 7 million, an increase of 276,832 from the previous week.