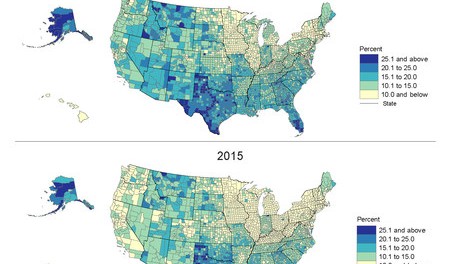 The following tip sheet was released today by the U.S. Census  Bureau:

The estimated uninsured rate for adults under age 65 decreased in 71.3 percent of the nation’s counties (2,239 counties) from 2014 to 2015, according to new statistics released today from the U.S. Census  Bureau.

These findings come from the 2015 Small Area Health Insurance Estimates, which are the only source for single-year estimates of the number of people with health insurance for each of the nation’s 3,141 counties. The statistics are provided by age and sex groups and at income levels that reflect thresholds for state and federal assistance programs. State estimates include health insurance coverage data by race and Hispanic  origin.

Today’s release includes a 2015 report that describes demographic and economic differences in health insurance status across states and counties, as well as trends in health insurance coverage. An interactive data and mapping tool is also available. This tool allows users to create and download state and county custom tables, thematic maps and time-trend charts for all concepts available annually for 2006 through  2015.

No news release associated with this product. Tip Sheet  only.