By Joel Gilbert, Special for USDR 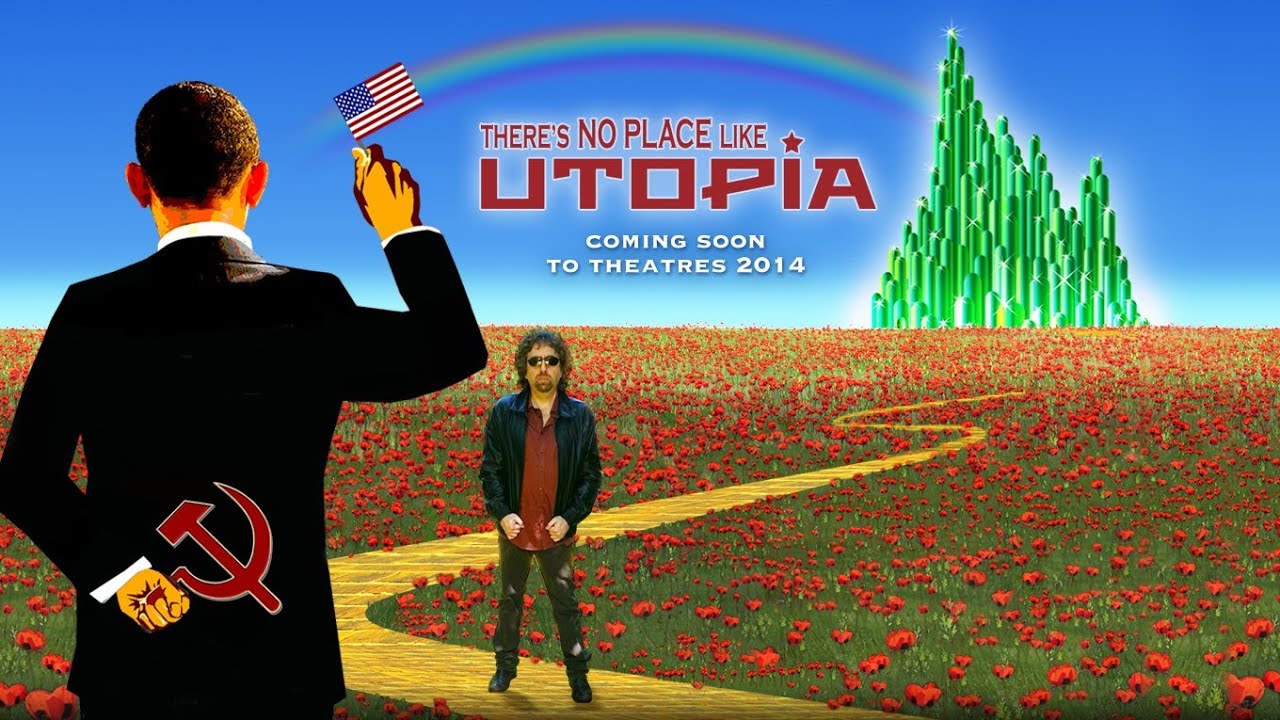 America, we have a problem. America has been under siege from a vast left-wing conspiracy.

Obama’s election was not a sudden political phenomenon. It was the result of an American socialist movement that Obama’s real father, Frank Marshall Davis, nurtured in Chicago and Hawaii, and has been quietly infiltrating the US economy, universities, and media for decades.

Why did Dorothy follow the yellow brick road? Is Utopia a real destination for America? Or, is the true path to happiness still faith, family, and hard work — back home in Kansas?

I have a film coming out this summer, its called There’s No Place Like Utopia. The title is a play on Dorothy’s conclusion in the Wizard of Oz, “there’s no place like home.”

Watch the trailer for There’s No Place Like Utopia:

Dorothy blindly follows the yellow brick road, believing a magical wizard will fulfill her all dreams. In the end, of course, she discovers the Wizard is a charlatan, a carnival hawker, he had only worked in a circus. His promises are empty. And worse, the Wizard sends Dorothy to the witch’s castle where she is taken prisoner in a dungeon.

In There’s No Place Like Utopia, I travel to different parts of the country – Detroit, Chicago, Newark, Washington DC, Denver, Miami – where I meet people who have been seduced by utopian promises, only to realize they have been had, and no longer had a home left. They were stuck in Oz.

In this film, Barack Obama is depicted as “The Wizard.” I think the analogy is well deserved. The fundamental lesson of the Wizard of Oz is that there is no wizard. Obama has made promise after promise that have all turned out to be empty, all turned out to be lies. The people I met who supported him were literally living in dungeons in the witch’s castle, everything had changed for the worse – Detroit, South Side Chicago, Newark. Fifty years of progressive control over these cities demonstrated that no one was progressing, they were all regressing.

The analogy is obvious, throughout history, millions of people followed charlatans like Mao, Stalin, Ho Chi Mihn, Pol Pot, Castro — they all promised to create a Utopia, a paradise on earth, but instead, the people who followed them they arrived to hell on earth – they were sent to the gulag, they were starved, and mass murdered by Utopians.

The word Utopia is from the Greek, it means “no Place.” Utopia is an imaginary, perfect society, heaven on earth, where everyone is happy. In Utopia, man has been perfected, all human beings are equal, and they think and act the same.

The idea of a perfect society was first mentioned by Plato in his work The Republic in 380 BC. The word “Utopia” was coined by Sir Thomas More in his 1516 book Utopia, in which he depicted a fictional island paradise in the Atlantic Ocean. In 1848, Karl Marx wrote in the Communist Manifesto that it is historically inevitable for societies to pass through four stages: feudalism, capitalism, socialism, and finally communism. In communist society, Marx described a “workers paradise” where perfect happiness and universal fulfillment would be achieved though the abundance of goods and services that only a government controlled society could produce – Utopia!

In the modern era, socialists adopted the fictional idea of Utopia, Marx’s worker’s paradise, as a realistic blueprint for the nation state. Ruling over “paradise,” the leader of communist society was considered to be “God on earth.” However, the Marxist model was a disaster. Every country that adopted the Utopian ideology suffered economic devastation and biological destruction as 100 million human beings were killed in peacetime through starvation, gulags, political repression, and murder in an attempt to mold human beings to fit into Utopia.

In the beginning, communists, progressives, used the phraseology like “we are going to organize the working man to fight and make a revolution, and overthrow the government.” Obama’s pals like Bill Ayers used this kind of rhetoric, and they acted on it. They planted bombs at the Pentagon, and murdered policemen, believing that the working classes would spontaneously join their communist revolution to destroy America.

But it didn’t work. It turned people off because it was evil. No normal person would want to bring down America and replace the constitution we were bequeathed by our founding fathers with the Communist Manifesto. So into the 1970s, and by the early 80s, progressives realized they could not overthrow the government from the outside. They decided that if they changed their rhetoric, they could trick average Americans into supporting them, take power, and then use the power to bring down America from within.

And since the 1980s, the progressives, which they now call themselves rather than communists, have slowly and successfully taken over the Democrat Party. Today their public terminology has become ever more benevolent. “We want to help to middle class families,” “we want fairness,” “we are problem solving” and “we want to help poor people” or just “change.” Fill in the blanks.

But make no mistake, today, the Democrat Party is a radical socialist party. For example, their leader is considered perfect and God-like, he cannot be criticized. There is no opposition within the Democrat Party. Any opposition from the outside the Democratic Party is considered to be evil. This is because socialism is a religion, it’s faith. If you don’t believe in their human God and their fantasy of Utopia, paradise on earth, you are the enemy. And who is God’s enemy? The devil. So, of course, you are the devil and you are evil because you oppose the one true God, the God on earth.

I’ll give you some examples. They claim:

We represent all that is good and all that helps people toward progress, while the Republicans want to stop progress.

We want to help people with health care, and Republicans want people to die.

We want to help women get mammograms, and they want to prevent it.

We want rich Americans to pay their fair share, and Republicans are just greedy.
Good and evil.

We want to help more poor people get food stamps so they can eat, Republicans don’t mind if they starve.

We want to help black people and minorities have access to vote, and Republicans want to stop them from voting.

On and on. Now, if you were a progressive who believes this nonsense, it’s not difficult to feel justified in lying to the public, suppressing the votes of conservatives using the IRS, lying about your agenda, lying about your background, lying about a dead US ambassador, lying about health care, committing voter fraud — you would do anything, you would commit any crime, if you believed you were taking humanity step by step toward the perfect future, Utopia. And the Republicans were preventing it. The fantasy of Utopia is why progressives murdered 100 million people, 100 million were murdered by Utopians in power. That’s why the ideology of progressivism is so dangerous.

Let’s take one example of voter ID and voter fraud. Democrats have been hammering the idea it is “voter suppression” if you advocate a voter identification requirement or if you question “why did 140% of the population vote in 10 counties in 2012?’ Here’s what I would like people to start talking about. Barack Obama started his political career by exposing voter fraud! You may not know this, that’s right! Obama owes his career to his efforts to stop voter fraud in Chicago. In 1995, when he ran for state senate against Alice Palmer, he challenged her petition signatures. Why would he suspect they might not be real? Obama had worked for Project Vote in 1992 in Chicago. Two thirds of the signatures were found to be not valid and Alice Palmer was disqualified.

So, let’s join Barack Obama’s initiative and investigate voter registration fraud. We owe it to him to continue his good work!

Another example is the daily lie of Democrats: “The upper income people don’t pay their fair share of taxes.” The audacity of the lie just grows and grows, even though they know anybody can just Google it and find out that yes, the top income earners pay the highest percentage, the middle pay in the middle, and the lowest pay no taxes. All this disinformation, it’s Soviet era propaganda and they are trying to use Soviet censorship to keep anyone from speaking out against all these issues on which they want to control the narrative.

I hope everyone will go see There’s No Place Like Utopia this summer. Thank you very much…