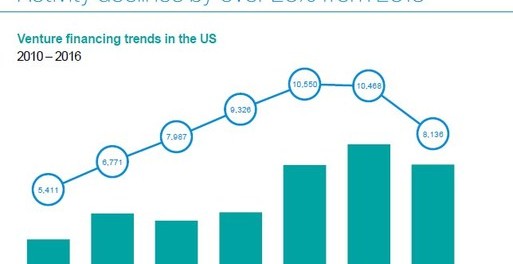 By KPMG LLP, Special for  USDR

After two strong years, both venture capital (VC) dollars invested and the number of deals in the United States declined substantially in 2016, according to Venture Pulse, a quarterly report on global VC trends published by  KPMG.

Year-over-year quarterly comparisons also illustrate the continued lull in US venture investing. Relative to the final quarter of 2015, US VC investment fell by nearly 25 percent in Q4’16, while the count of completed financings slid by 27  percent.

“2016 was a reality check for the VC market,” said Brian Hughes, National Co-Lead Partner, KPMG LLP’s Venture Capital Practice. “Investors drew back considerably. They paused, re-evaluated and focused on their existing portfolios and gave greater scrutiny to deploying new money to both new and existing  investments.”

Unicorns and  IPOs
The creation of both unicorns and IPOs was in short supply during 2016. In fact, the 2016 IPO market for VC-backed companies in particular is said to have been the worst since 2013. A bleak IPO market led to significant market skepticism of potential  valuations.

There are indications, however, that the tide is turning for the IPO market. The success of Twilio, Coupa and others has spurred some optimism that the IPO market will open again in 2017. Snap, the parent company of Snapchat, has filed for an IPO which is expected toward the end of Q1’17. Other companies are also predicted to follow  suit.

As the IPO market weakened in 2016, corporate M&A became even more crucial for venture investors’ liquidity prospects. The $42.4B in exit value achieved via that exit route was the second-highest tally of the decade, only below the massive $68.8B notched in  2014.

“With some of the uncertainty gone, optimism is growing within the VC market in the US,” said Conor Moore, National Co-Lead Partner, KPMG LLP’s Venture Capital Practice. “Economic indicators look reasonably good and it seems like it could be a strong year for IPO exits. If the expected exits materialize, they will put a lot of money back into the coffers of VC firms, which could loosen up VC investment dollars as  well.”

Early Stage Seed  Level
First-time financings in the US hit the lowest level last year since 2010 – with only 2,340 deals in 2016 – although the total of VC investment in those rounds remained substantial at  $6.6B.

About KPMG  International
KPMG is a global network of professional firms providing Audit, Tax and Advisory services. We operate in 155 countries and have more than 162,000 people working in member firms around the world. The independent member firms of the KPMG network are affiliated with KPMG International Cooperative (“KPMG International”), a Swiss entity. Each KPMG firm is a legally distinct and separate entity and describes itself as  such.

About Venture  Pulse
The Q4 2016 edition of the Venture Pulse report produced by KPMG Enterprise’s Global Network for Innovative Startup, analyzes the latest global trends in venture capital investment data and provides insights from both a global and regional perspective. Data for the report provided by  Pitchbook.