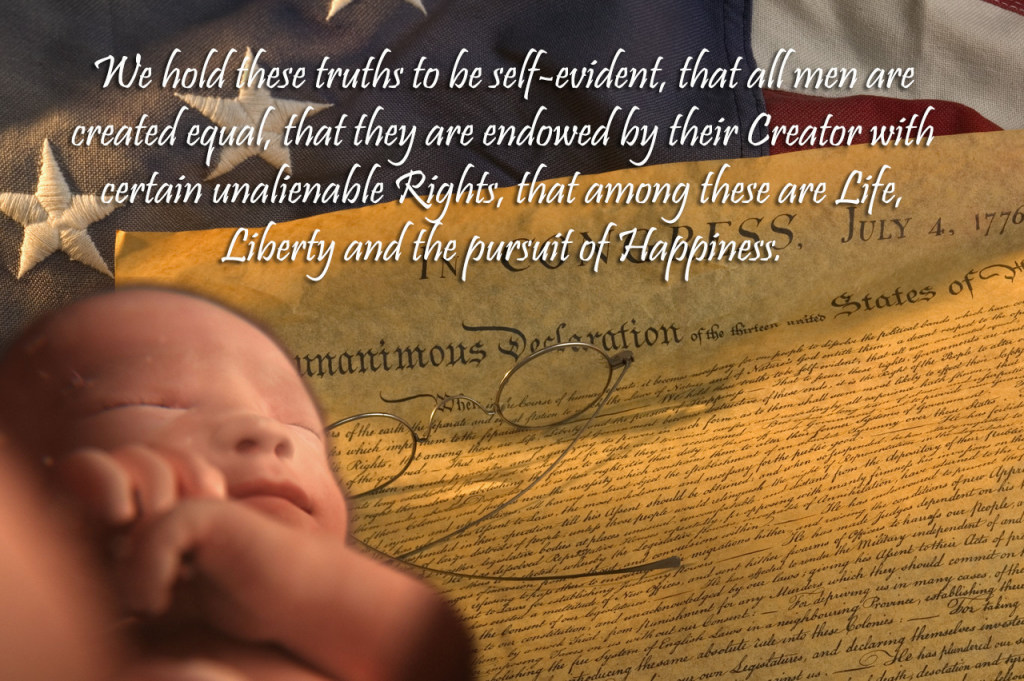 I’ve had cause to ponder this war the liberal left has on the unborn of our nation, and it is bloodthirsty unconscionable. Just to put it in perspective, since Roe v. Wade was upheld by the U.S. Supreme Court 54,500,000 babies have been aborted in the United States of America. All in the name of women’s rights, but those rights from God for all are denied to the unborn child. As a quick measuring stick, over 6,805 American soldiers have been killed during our War on Terrorism in Afghanistan and Iraq over the last thirteen years. The numbers in comparison are staggering.

One of our founding documents, The Declaration of Independence, clearly states that all men (and that includes the unborn) have the unalienable rights of “life, liberty and the pursuit of happiness”. These rights come from God, not from man, as do the children we so cavalierly dispose of through abortion. But in allowing indiscriminate abortion we are denying the most basic of those selfsame unalienable rights to the unborn of America, life.

There are those who use abortion as birth control, and there are those who use it because they “just aren’t ready”. But let me pose this, that child you carry within your womb played no part in its conception. When you decide that child is inconvenient and you consider abortion, you are punishing a child that is innocent, and you are willfully denying that child of his or her God-given rights.

If we look at today’s society we see the constant and unrelenting attacks against traditional values and the traditional family. We see the moral fiber of our society disintegrating before our very eyes. Attacks on Christians and our values are escalating in America, and have reached astronomical numbers throughout the world. Women throughout the millennia have been subjugated and dominated, and when we broke the domination in the western world, some took it entirely too far. Now we are a nation that does not value our unborn children and it is heartbreaking to see.

If you believe the founding documents of the United States of America are worth supporting, then how can you deny our unborn children the right to life, liberty and the pursuit of happiness? First, let me say that I understand if the mother’s life is in danger, or the pregnancy is the result of incest, then I will not say they cannot abort the pregnancy. However, I strongly believe the most innocent person in every situation is the unborn child. It isn’t easy, but nothing worthwhile ever is.

I strongly believe that when we stopped treasuring our unborn children and allowed 54,500,000 babies to be aborted God could no longer protect us from the traitors who have turned against America. The likes of Howard Zinn and his ilk have the sole desire to destroy America, and his greatest disciple sits in the Oval Office of our White House. Barack Obama has openly declared that he not only supports abortion, but encourages his daughters to immediately get an abortion if they find themselves pregnant. He doesn’t want them to pay for their mistakes. But tell me this, why does the unborn child pay for something he or she has not done?

I don’t assume I can ever convince those dedicated to abortion to change their minds. But it is my hope that those who are undecided not only recognize the sacredness of life, but also realize if they fight for America to remain a republic, than they must also fight for the life of the unborn.