The National Center for Public Policy Research announces the newest release in its ongoing series of videos by conservative filmmaker Steven Crowder, the mini-documentary, “Mixed Martial Arts Banned as Favor to Unions.”

The video documents the rise of Mixed Martial Arts (MMA) as a safe, competitive sport and its rising popularity worldwide.  As Steven Crowder notes in the video, a single MMA event, the Ultimate Fighting Championship, generated 40 million dollars in Toronto last year.

Yet the MMA has been banned in New York State — and not, MMA fighters and representatives allege, because it is dangerous, but because New York politicians are doing a favor for organized labor.

We dont need New York, but New York sure could use us,” says Chael Sonnen, UFC middleweight fighter, in the video.  “New York is struggling, and we could show that we could bring ten million dollars to the economy in a five-day period. We can show those numbers.

Crowder says the dispute over allowing MMA events in New York came about when a culinary union in Nevada sought to expand its dispute with a Nevada casino owner beyond standard negotiating techniques.  The casino owner is a majority owner of the premier MMA event, Ultimate Fighting Championship.  Allied with unions, New York politicians decided to ban the MMA from the state to show private support for the union’s efforts.

Publicly, the politicians say the debate is about safety.  But Crowder alleges mixed martial arts as practiced under the strict rules of the MMA is far safer than boxing.

MMA fighters object to politicians disparaging their sport, which, some say, could somedayovertake the NFL in popularity, over a union dispute they have no part of.  And they question how well the public is being served by politicians. 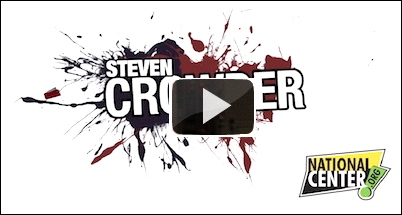 The National Center For Public Policy Research is a conservative, free-market non-profit think-tank established in 1982. It is supported by the voluntary gifts of over 100,000 individual recent supporters, and receives less than one percent of its revenue from corporate sources.  Contributions are welcome and greatly appreciated.