Eight of the 15 fastest-growing large U.S. cities and towns for the year ending July 1, 2012 were in Texas, according to population estimates released this week by the U.S. Census Bureau. The Lone Star State also stood out in terms of the size of population growth, with five of the 10 cities and towns that added the most people over the year. 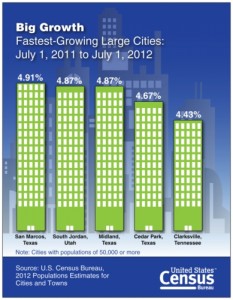 The fastest-growing municipalities are spread across Texas, from the High Plains of West Texas to the Houston suburbs. San Marcos, along the Interstate 35 corridor between Austin and San Antonio, had the highest rate of growth among all U.S. cities and towns with at least 50,000 people. Its population rose 4.9 percent between 2011 and 2012. Completing the top five nationwide were Midland and Cedar Park, both in Texas; South Jordan, Utah; and Clarksville, Tenn. No state other than Texashad more than one city on the list of the 15 fastest-growing large cities and towns. However, all but one were in the South or West.

The Texas cities that added the most people included Houston, San Antonio, Austin, Dallas and Fort Worth. New York, the nation’s largest city, topped the list and was the only city among the top 15 outside the South or West. It added 67,058 people over the year. Three cities were in California: Los Angeles, San Diego and San Jose.

New York continued to be the nation’s most populous city by a wide margin, with 8.3 million residents in 2012, followed by Los Angeles and Chicago. The composition of the list of the 15 most populous cities has remained unchanged since last year; however, the list’s order has changed slightly. Between 2011 and 2012, Austin moved up from 13th to 11th in total population, supplanting Jacksonville, Fla., while Indianapolis moved down from 12th to 13th. Texas and California each had four cities on the list in both years.

The estimates released today cover all local governmental units, including incorporated places (like cities and towns), minor civil divisions (such as townships) and consolidated cities (government units for which the functions of an incorporated place and its parent county have merged). 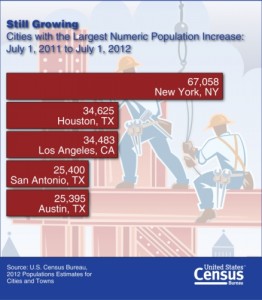 For more information about the geographic areas for which the Census Bureau produces population estimates, see http://www.census.gov/popest/about/geo-topics.html.

The population clock, one of the most widely visited features of the census.gov website, displays continuously updated projections of the total U.S. population, including the rate of births, deaths and net migration for the United States. The projections are based on a monthly time series of population estimates starting with the April 1, 2010, resident population count derived from the 2010 Census. Additionally, users can access tables displaying the most populous states, cities and counties in the United States.