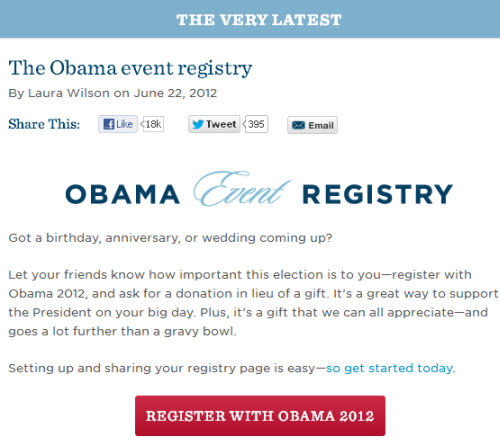 Although I still consider myself relatively young, I do believe I’ve possibly seen everything now. A sitting president of the United States of America a.k.a. Barack Obama, with absolutely no shame, has asked couples getting married to donate all their gift money to him instead. Never mind about getting a start on life, or people thoughtfully considering what they’d like to give you to help you start a home of your own, Barack Obama wants you to begin married life with nothing. And in case you were thinking that was all, he wants your birthdays and anniversaries too. You think I’m kidding…I’m not.

Mitt Romney and the Republican Party are outraising the Democrats, and Barack Obama at every turn.  And it’s not just money. Obama is running scared. He’s got a metaphorical campaign scattergun and he’s stuffing the barrel with anything he can think of…let me count the ways. Going back just a few months:

One: First, the Obama Administration decided churches would have to violate their morals and principles and do what he told them to, excuse me, what Obamacare legislated they had to do. That didn’t work well, the Catholic Church fired back with both barrels, and then fired again, Obama lost.

Two: Moving on with no trepidation, they declared the GOP was waging a war on women. But that didn’t work either, because their poster girl turned out to have her facts all messed up, spent a vacation in Ireland with her boyfriend, and was a blooming idiot, not to put too fine a point on it. Plus, since it was all over contraception, Obama apparently forgot that Planned Parenthood hands out contraception like its candy. Obama lost, again.

Three: Then the liberal media, egged on by the Obama Campaign, decided to attack Ann Romney, a lady of great class and grace. Wow, did that one backfire!  In about every way it could. Obama lost, in colossal fashion.

Four: Then Obama started giving speeches where he made it clear that none of the bad things happening in America, or the economy were his fault. He proceeded to blame the tsunami in Japan, the economic collapse in Europe, George W. Bush, the Republicans, the rich, Wall Street … oh, who have I forgotten? Well, you get the idea. Personally, I think the man never emotionally made it out kindergarten, because there is an eerie familiarity in his behavior.

Five: Let us not forget immigration. Barack Obama overreached his constitutional authority, dipped his toe into the congressional pool, and granted temporary amnesty to a segment of the illegal alien population. And yes,the firestorm ensued. Again.

But that’s not all. Let’s move on to Six. Oh yeah, Fast and Furious, one of this administration’s greatest shames. Attorney General Eric Holder, who lied while testifying to Congress, was finally backed into a corner, called up his buddy in the Oval Office and asked for Executive Privilege to be exercised, which Obama promptly did. He must have been startled to find out he wasn’t king after all, because he got blasted all over the place for that one. And rightly so, the lives of Border Patrol Agent Brian Terry and ICE Agent Jamie Zapata should not be dismissed.

And now the pièce de résistance, Barack Obama found out that Mitt Romney, the GOP, and the Conservative Super PACs have outraised him at every turn. And this is when he and his campaign introduced The Obama Event Registry.

Got a birthday, anniversary, or wedding coming up?

Let your friends know how important this election is to you—register with Obama 2012, and ask for a donation in lieu of a gift. It’s a great way to support the President on your big day. Plus, it’s a gift that we can all appreciate—and goes a lot further than a gravy bowl.

Setting up and sharing your registry page is easy—so get started today.     Source

Oh yeah, you saw right. Obama doesn’t care about you getting any advantage in beginning your life together, he wants you to promptly hand over the cash to him right away. Oh, and don’t forget that birthday or anniversary, hand your cash over to the self-proclaimed king. Because … he deserves it, right?

It’s official, Barack Obama has lost his mind. Time to trade him in on a new model, at last. November 6th can’t come too soon.