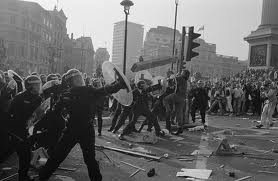 One of the biggest stories in international news is the riots that have broken out through out the United Kingdom.  Was it caused by people angry over police actions? Is it a massive revolt as “cradle to grave” socialism is facing serious cuts? Or was it motivated by the social network, as speculated by some.  Here are some interesting stories on one of the most important stories of the week.

UK Riots: The People who Defined the Week from the Guardian.

Britain’s riots: Anarchy in the UK | The Economist