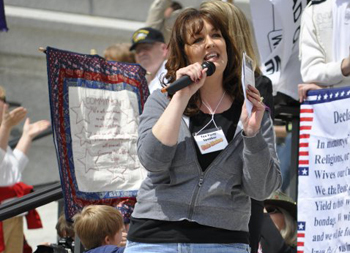 I’ve heard over and over in the last few months, “What’s happened to the tea party, where are they?” Please don’t paint us with the Occupy Wall Street brush. Let me explain the difference between the two and just where the Tea Party has “gone.”

Now let’s look at the Tea Party. In February of 2009 Rick Santelli went on a rant on the floor of the Chicago Stock Exchange. Enraged by the Obama policies, he invited everyone to join him on the shores of Lake Michigan for a tea party of their own. That was all it took. Over the next few weeks Americans held small tea parties wherever they were. And then nationwide organization of the movement begin. On April 15, 2009, there were over 1,000,000 Americans participating in simultaneous tea parties across the nation. By the following year the movement, according to FoxNews, had grown to over 39,000,000 Americans fed up with Obama and the 111th Congress’ wholesale destruction of America.

Then what happened? I can only personally testify to what happened here in Utah. Within days of the nationwide April 15, 2009 Tax Day Tea Party, tea party patriots all over the state met in groups. In Salt Lake City, a number of coalitions were formed so that we wouldn’t lose the momentum the tea party rallies had generated. By the following year, there were Constitution Conferences dedicated to the educating of the public as to the strength and power of the U.S. Constitution. There were conferences on the founding of America and our founding generation. More importantly, we had good men and women rise up out of the tea party, willing to run for public office. So the tea party patriots divided themselves among these candidates, utilized the incredible caucus system we have here and unseated a powerful U.S. Senator, Bob Bennett. We sent Senator Mike Lee back to Washington, D.C., who promptly created a tea party caucus in the U.S. Senate. All three of them; Lee, Paul, and DeMint, fight the daily battle for conservative values. In addition we took the House of Representatives back, and began fighting the Republican establishment as well as the liberals. As if that were not enough. We also swept the state legislatures and governorships. We then turned our focus to the White House.

It is now commonplace to see the U.S. Constitution in the breast pocket of suit jackets and the back pockets of jeans, on smartphones and all kinds of mobile gadgets,  slipped into briefcases and purses. The founding generation is mentioned often, their teachings, values and principles discussed and shared across the board. Are you a James Madison constitutionalist or an Alexander Hamilton constitutionalist, was a question never asked before the Tea Party came to town. Before the Tea Party, the deficit, the overreach of the federal government in every way, and the rise of socialism went largely unnoticed.

As the Tea Party grew, the negative connotation attached to socialism and communism dwindled. The spin masters became experts at painting the rotting corpses of socialism and communism with white wash, splashing a little cologne on them and calling them good. We now stand at a crossroads in America, will we remain a republic or will we dive to the rotten, stinking bottom of socialism? We live in an historic time now, and we have Americans awakening to the dangers around us, and this is largely due to the Tea Party.

We took to the radio, television and print media to further the reach of the conservative message. We took to the school rooms, taking on school boards, challenging their curriculum and demanding a return to the teaching of the U.S. Constitution as the most superior form of government, bar none, in the world. We held cottage meetings, increased our reach in social media, we attended caucus meetings and primaries in record numbers, and we’re ramping up to finish the job in 2012.

So you want to know where the Tea Party is? Open the door, that’s liberty knocking.