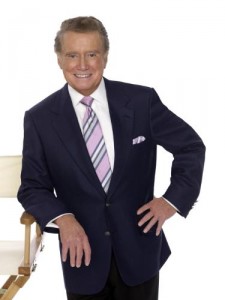 The entertainment news recently has been largely dominated with the retirement of long running TV personality, Regis Philbin.  With today marking Regis Philbin’s last day on television’s popular daytime talk show, Live with Regis and Kelly, rumors are rampant about what he’ll be doing next.  Here’s one truth: come March 13, he’ll be heading east—the Far East that is, as a guest speaker aboard Crystal Cruises’ Hong Kong to Osaka voyage of its World Cruise.  Who knows, maybe he will sing a song or two.

Rumor has it that Philbin will soon be moving to another TV gig, but there is nothing that can be confirmed. However it is clear the entertainer has no intention of letting the moss gather.

Multiple Emmy Award-winner and the Guinness World Record for most hours on camera,” Philbin is renowned in the U.S. for more than 50 years hosting TV talk shows, game shows, and a plethora of other entertainment programming.  As part of Crystal’s award-winning enrichment program, guests will have a rare opportunity to see, and interact with, the ever-affable “Reeg,” speaking about his life and legendary career.  Guests can experience his trademark wit “live” without the cameras, and even have their own fun chat session with him via an audience Q&A.  His wife, Joy, will accompany him on the sailing.

Philbin has had a long-time rapport with Crystal, having sailed as a celebrity guest speaker more than 10 years ago, and, in more recent years, presenting Crystal President Gregg Michel with Condé Nast Traveler‘s “Best Large-Ship” Readers’ Choice Award.

“Given all the opportunities open to him, we’re thrilled Mr. Philbin wanted to come back aboard for another star-treatment ‘Crystal Experience’,” says Crystal’s Vice President of Entertainment Bret Bullock.

The “Kingdoms of Silk & Jade” Crystal Serenity sailing overnights in Hong Kong before visiting Xiamen,Shanghai (overnight), and Dalian, then heads inland to Beijing for a complimentary three-day inland adventure, followed by calls in Seoul/Incheon (overnight), Nagasaki, and Osaka (overnight).

According  to the cruise line, “Crystal Cruises’ award-winning entertainment offerings include a range of venues and performances, from cabaret nightclub to piano bar saloon; acclaimed productions to headline entertainers; and sophisticated enrichment activities to in-room Blu-ray-viewing, for all world travelers.  The renowned Crystal Experience has been rated ‘World’s Best’ more than any other cruise line, hotel, or resort in history.”