By Kevin Price, Publisher and Editor in Chief, US DailyReview. 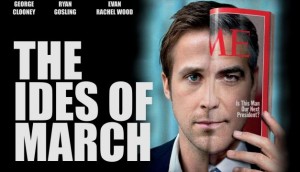 I have been looking forward to the political drama Ides of March for quite some time.  I enjoy everything “political.” I’m a junkie, and this includes movies.  This movie starred the charming George Clooney and Ryan Gosling — two of Hollywood’s favorite pretty boys.  Its focus is on the ideal presidential candidate — Geroge Clooney as fictional character Gov. Mike Morris, a popular upstart candidate pursuing the Democratic nomination for President. The lead character is actually Gosling, who plays Clooney’s idealistic media strategist, Stephen Myers.

Having had worked in politics much of my adult life, I was naturally critical of the things that were not accurate about the picture.  This required some knowledge of politics.  Gosling’s character was not very real at all.  People who have done as many campaigns as he had, would have lost enough of the idealism that overflowed from Gosling, to have some healthy cynicism when it comes to political realities.  What Gosling lacked in this area, the movie more than made up for it.   Then there is a plethora of little things that are too insignificant to bore you with and remain only relevent to someone who has worked in this “industry.”

The characters, with the exception of Clooney’s, were all very one dimmensional and predictable.  The chief strategists of the opposing candidates (played by Philip Seymour Hoffman and Paul Giamatti) were almost identical in termperment and behavior.  The young intern was completely idealistic, which found her way over her head.  Gosling actually showed two characters: the ideologue and “good” guy who turns to the “dark side” when the tide goes agains him.  Clooney’s character was the most interesting.  Obstensibly, he is committed to being a person of principle and would rather lose than win using dirty tricks.  Yet his personal compromises leads him to abandoning all that he believe was “right” or “true” to fulfill the demands of Gosling’s character who has the means of destroying him.

In the end, the move was too predictable, the characters too one dimensional, the message too cynical.  If you want to be depressed by the current state of affairs, just watch the evening news and save your ticket and snack money for something enjoyable.

On a scale of 5 stars, I give is 2.5 for visual quality and solid performances (albeit with limiting scripts).