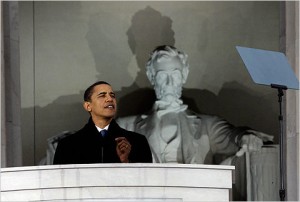 The American people seek action, not rhetoric, when it comes to unemployment.

Last week President Obama did what he seems to do best — give a speech with the assistance of a teleprompter.  However, after two years of long term recession, the American people are beginning to say, “enough”.  They are tired of the same old lectures to Congress on how government needs to do more, as the more they do devastates the economy further.  The reality is, government needs to do less and it must happen quickly.

If Obama and Congressional leaders were serious about job creation, they would take a decidedly different approach than taking money from current and future generations through taxes and creating obstacles in the form of regulations between people and jobs. The following are just a few suggestions:

* Do an inventory of the barriers that stand between people and jobs, then eliminate them. This isn’t done through temporary government jobs that will run out with bailouts, but through real jobs that create revenue for them to grow in quantity and quality. Although I oppose a federal minimum wage, you are not going to make one go away in the current political environment. However, the federal government could mandate that each state have its own minimum wage law and allow them to set it based on the needs of their states and their cities. This would not cost the federal government a penny, but would spur economic activity immediately. Certain cities, such as Camden (New Jersey), East St. Louis (Illinois), and Detroit suffer from an unemployment of well over 20 percent. They need help like this immediately. In addition to creating jobs and solving employment problems where they are – locally – it would also help to restore the federalist system that helped make this country great.  Federalism creates competition among the states, forcing them to find the golden mean between protecting the people without harming the economy.

*  Since businesses do not pay taxes (they are only tax collectors through higher prices or lower quality products), we must eliminate taxes on corporations. Taxes are simply a fixed cost for doing business, nothing more. If taxes are too high, businesses have no choice, but move to other countries where the rate is less so they can lower prices and be more competitive. Businesses do not take these actions because they lack patriotism. Instead, these companies have a responsibility to serve their customers with the best product and at the most competitive price.  Furthermore, businesses have an obligation to its stockholders to return profits.  Businesses are doing what is in their best interest.  Our government should do what is in the best interest of its people, which is eliminating corporate taxation.  Doing such would dramatically increase job creation and help soften the potential blow of inflation (since inflation is too much money, chasing too few goods, an increase in productivity will help bolster a significantly weakened dollar).  At the very least we should develop an approach that links our taxes on businesses to the rates of foreign countries. If any country lowers its rates to below our current levels, the US should automatically respond in turn to maintain competitiveness.  People fear that it would make revenue less predictable. It would not be nearly as bad as having the revenue leave entirely as businesses move to other countries.

*  It is time to end taxes on wealth (and job) creation and replace the income tax with a sales tax. This would eliminate the economic genocide against job creators we are seeing today and would more fairly spread the financial burden of government on all economic groups. If every economic group (and every adult) shared the burden of funding the government, that would encourage all groups to make government fiscally accountable.  The reality is, virtually everyone pays federal taxes.  Do not believe the Democrats lies or the Republicans protests.  Since taxes are a fixed cost of doing business, they are passing the cost to those who buy their products and services.  The problem is, those paying that cost don’t see the link to government.  If taxes were paid by individuals in an open and transparent way (such as through a sales tax), it would make everyone interested in what government does.

Tired of rhetoric?  The above simple agenda could make a significant different in our country’s efforts to restore prosperity.