Editor’s Note: This article only covers one month, August, and it is from a news site (Huffington Post) that clearly represents the interests of the Democrats.  In the last Presidential election Barack Obama garnered ten times more in financial support than Sen. John McCain.  It is odd to see the Democrats be outraised by anyone these days, so it is no surprise that it is a part of the Post’s news cycle.  It is our opinion that it is designed to be a wake up call to its liberal friends that it is time to start giving money.  We also see it as a sign of encouragement for Republicans who thought it would be impossible to out spend the Obama machine: 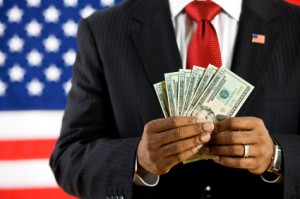 For only the second time in 2011, the Republican Party’s main electoral committee out-raised its Democratic counterpart, according to disclosure reports filed Tuesday with the Federal Election Commission (FEC). The Republican National Committee (RNC) pulled in $8.1 million in August, while the Democratic National Committee (DNC) raised $5.3 million.

The RNC reported its highest haul yet from small donors who gave less than the $200 threshold required for disclosure. One-third of the RNC’s disclosed contributions, meanwhile, came from donors giving $30,800, the maximum allowed per person during an election cycle. Donors giving the maximum include long-time Republican lawyer and presidential advisor C. Boyden Gray and wrestling mogul Vince McMahon.

Though the RNC now has $9.3 million cash on hand, it must continue to pay off a large debt — now at $15.9 million — that was accumulated by the previous chairman Michael Steele.

The DNC continued to raise money in the exact same way it has all year: through a combination of big donations to the Obama Victory Fund and a mix of repeat and new small donors. The committee raised $1.4 million in August from the…(read more)