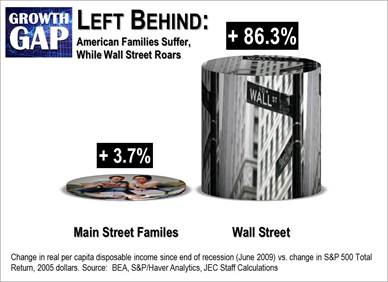 “Wall Street is celebrating, but what about our middle-class families?  In President Obama’s disappointing economic recovery, they are being left behind.”

Brady points out that the Obama’s stimulus and the Federal Reserve’s $2 trillion of quantitative easing and five years of extraordinarily low interest rates have boosted stock prices, benefiting Wall Street, while ignoring middle-class Americans.  The S&P 500 Total Return Index is up by more than 86%, while real disposable income per person (3.7%) is two-thirds less than in an average post-1960 economic recovery (11.7%).

“Here is an eye-opener: the typical American family of four is missing over $11,000 in real disposable income because President Obama and the Federal Reserve have focused on Wall Street instead of Main Street.  The Fed’s ‘easy money’ policy hasn’t encouraged businesses to create new jobs for middle-class Americans, while our retirees and savers have seen their interest income erode.  And ObamaCare is raising everyone’s health care costs.  That’s nothing to celebrate.”