By William Bell, Contributor to US Daily Review. 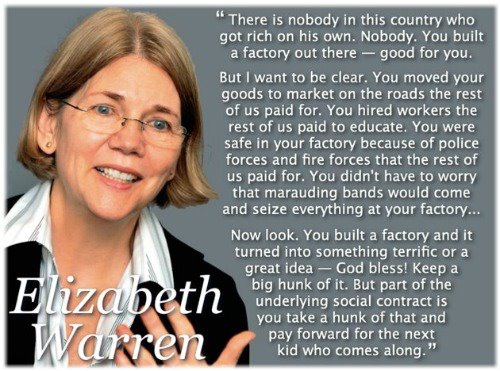 I remember the first time I saw Liz Warren on Television. It was a little freaky for me. The last time that I saw or heard from her was in law school. She taught contract law at UH Law School and I was in her class. But the Liz Warren that I saw on television was not the same person who taught me contract law. She looked the same, but the words were from another planet.

The Liz Warren I knew understood that laws needed to be equitable in order to work. She taught me that inequitable laws, even those with good intentions, created more inequities. To illustrate this, she taught us that laws that were designed to protect people often end up hurting them more than they helped them. The law is full of examples. Long ago in Texas, we had a law that a married woman could not convey title to real estate unless she was taken aside (away from her husband) and privately asked whether she agreed with the sale. The Texas legislature was afraid that husbands might trick their wives into giving up the community property rights that were theirs under Texas law. Their goal was noble. They wanted to protect her. But in the end, the law made it difficult for married women to engage in real estate transactions. In the end, they were probably hurt more than they were helped. And this is the effect of laws that single out a class of people for the purpose of protecting them!

Liz seems to have forgotten her own lesson: Inequitable laws don’t work. Instead, she is suggesting that it is good idea to tax a person or company more, because they are successful.[1]

She argues that factory owners owe the rest of society a “chunk” of their wealth because they use public roads, hire publically educated workers, and are protected by public law enforcement and fire protection. To get to this conclusion, you need to do some large-scale mental gymnastics. You have to:

What is really crazy about her argument is that if you use her logic, then these poor factory workers should be paying some of their wages as additional taxes too. They were educated at public schools. They traveled to work on public roads. They were protected by the police that we all paid for. Using her logic, they should pay more tax too in order to account for all of the government benefits that they use to get to their jobs. I doubt if Ms. Warren is going to demand that the laborers pay up for all the “free” benefits that they received.

There is one other oops that she overlooked. If these greedy factory owners should pay because of all of the benefits that they are receiving, then why is it that local governments court them and want them to build their factory in their back yard?  Is it because the local governments are so flush that they enjoy giving away tax dollars to help millionaires? No. The local governments court these businesses because they expect to collect more tax revenues from the factory and from the jobs that will be produced. In other words, the mean old factory owners are already giving back to the community. Local governments want to build colleges and infrastructure in order to attract businesses. Instead of some vague notion of a social contract, she should be looking at reality. Businesses locate where they will have access to these services. On the flip side, local governments expect more revenue from the new factory than they expend. It is a real contract and both sides win.

It seems to me that the force of her argument flows from the unstated assumption that corporations are owned by rich, greedy millionaires who are using government benefits to make themselves even more rich.  I’m sure that her audience is picturing the factory owner as a fat, cigar smoking millionaire who squashes the little guys and eats children for breakfast. This makes it easier for her to justify the use of government force to steal his money. She certainly wasn’t thinking about corporations like Apple or its former CEO, Steve Jobs: “They’re different.”

Who is it that owns these factories anyway? Oddly enough, some of the stock in these companies is owned by these same little guys that she wants to protect. They may not own it directly, but in most cases they own it indirectly through their insurance companies, retirement plans or other vehicles. Hurting the shareholders hurts the very people that she wants to help.

I am not a defender of corporate America. I think that some people use corporations in order to avoid responsibility. But the answer is not to make the successful companies pay more. Instead, we need to hold corporations accountable for violations of the law. If a corporation commits theft or fraud or some other crime, then the leadership should go to jail.

One final point, I doubt if Ms. Warren would hold the Federal Reserve, a private corporation, to this same standard. If not, then how are we going to decide who we are going to pillage?

From the lofty towers of Harvard Law School, Liz tells us that we don’t have to worry about marauding bands who will steal everything. She’s right. By the time Obama and Co are finished, there won’t be enough left to steal.

[1] You probably noticed that she did not propose that we tax unsuccessful factories more, even though they ‎used the same resources. Therefore, the only difference between the two, is that one was successful.‎

William Bell is a life-long Texan. He is a graduate of the University of Texas and University of Houston Law Center. He has practiced corporate and real estate law in Houston, Texas for the past 27 years. He has over 35 years of experience in the real estate and construction industries. His law practice concentrates primarily on real estate development, management and marketing, including office buildings, apartments and retail. He is the owner of Bell Legal Services and an officer and director of William Bell & Sons Realty, Inc.