By The Price of Business (1110 AM KTEK, Houston, TX is the sister radio program of US Daily Review and is Hosted by USDR Publisher and Managing Editor, Kevin Price). 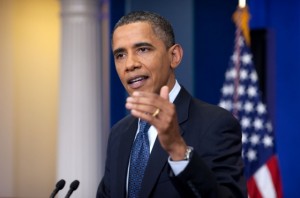 Check out that interview in its entirety.

The interview is based on the following article from Heritage.org:

President Obama sure was excited about his speech yesterday. He talked for more than an hour in sweeping, grandiose terms about everything that’s happened since he became President, and everything that’s still going to happen.

If only more of it were true.

He’s said this before, and each time, it’s actually less true. To hear the President tell it, Obamacare is all about security, free things, and discounts.

But the daily march of Obamacare is bringing higher premiums, new taxes, and fewer choices. The Obama Administration has already delayed the employer mandate—only the latest in a string of delays and failures to implement the law.

In his speech yesterday, Obama said, “There are folks out there who are actively working to make this law fail.” Nope, the law is failing just fine on its own. And that’s why Congress should not fund it with taxpayer dollars.

This was one of Obama’s big first-term promises, so he would like to show that he’s delivered on it. But this claim ignores the huge deficit he ran up during his first few years in office.

Congress had to pass Obamacare before we could see what was in it. Maybe Obama had to run up the deficit before he could cut it?

“Public debt doubled under his watch,” says Romina Boccia, Heritage’s Grover M. Hermann Fellow in Federal Budgetary Affairs. “Deficits projected at $642 billion by the Congressional Budget Office for this year are ‘low’ only when compared to their trillion-dollar-plus levels over the past four years. The U.S. deficit and debt situation actually worsened since before the recession.”

The President paints himself as the savior of the middle class—and it’s the nefarious 1 percent he’s going to save us from, so he has to drive a wedge between the classes.

His claim: “The income of the top 1 percent nearly quadrupled from 1979 to 2007, while the typical family’s barely budged.”

But in fact, incomes across the board have been rising. Heritage’s David Azerrad dispatches Obama’s falsehood:

According to the nonpartisan Congressional Budget Office, after-tax income has risen for all Americans, albeit by very different margins, during this timeframe. For those in the middle three quintiles—i.e. the “typical families”—income has increased by almost 40 percent.

As Ron Haskins and Scott Winship of the Brookings Institutionconclude: “There is no disappearing middle class in these data; nor can household income, even at the bottom, be characterized as stagnant, let alone declining.”

American workers today are more productive and better compensated. Their problem is a lack of jobs. And for that, we have President Obama’s policies to thank.