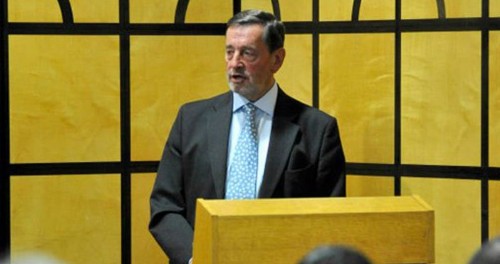 By UCW, Special for  USDR

Professor Lord David Blunkett, a high-profile British politician who recently made news headlines by drawing parallels between Donald Trump’s pursuit of the American presidency and Britain’s impending vote on Brexit, is coming to  Vancouver.

Recently appointed Chair of The University of Law in London, England, The Right Honorable Blunkett was a cabinet minister in former British Prime Minister Tony Blair’s labour government, which came to power in 1997. He is also a professor of Politics in Practice and chair of the Board of the Crick Centre at the University of  Sheffield.

Blind since birth, Professor Lord Blunkett will deliver a free public speech at the University Canada West (UCW) at9:30 a.m. (PST) on Wednesday, June 15 on the potential impact of Brexit on Britain. Registration for attendees will be at 9 a.m. Brexit is a merger of the words Britain and exit. Blunkett’s speech will take place at UCW just eight days before the Brexit  vote.

In the national referendum, British Prime Minister David Cameron’s government will ask Britons: “Should theUnited Kingdom remain a member of the European Union (EU) or leave the European  Union?”

In The Brexit: Will Britain leave the EU and why should anybody in North America care? Blunkett will argue that remaining in the Union amounts to a marriage of economic, social and international survival.  The EU is an economic and political partnership involving 28 European  countries.

Despite being opposed to Britain’s involvement in the EU in 1975 when it was first created, today Blunkett warns Britain’s exodus from the Union would be catastrophic. It would erode Britain’s substantial role in helping Europedeal with Islamic State terrorism, organized crime and mass  migration.

“Yes there is an enormous need for continuing reform of the grinding bureaucracy that permeates the EU,” says the former Member of Parliament of 28 years for Sheffield Brightside. “But in a world of global markets, people movements and global blocks, we need each other more than ever before. In terms of finance and business, in terms of the nation state and democratic politics the challenge in front of us is blindingly obvious.  To have power, we need to be able to work  together.”

Blunkett was Britain’s Home Secretary during the 9/11, 2001 attack on the United States’ World Trade Centre. He notes that since that world changing event Britain and North America have come to appreciate that collaboration is key to resolving issues of power and  terror.

“We are in a fortunate position that we are trusted by and able to work extremely closely with the United States on intelligence gathering, analysis and action,” notes Blunkett.  “But it is extremely silly and beneath those who should know better to suggest that this somehow ‘trumps’ if I dare use such expression these days, wider co-operation against terrorism on our  doorstep.”

He warned that the world should be mindful of how a breakdown of voters’ trust in traditional politics can lead them to consider wacky proposals and destabilizing opt-out mechanisms. He cited Trump’s “crazy wall between Mexicoand the U.S. to keep out illegal immigrants” and the British Out-Campaign’s comparison of the EU to a Hitler-like “European State” as examples of  this.

The University of Law and UCW are part of the Global University Systems (GUS) international network of higher-education institutions headquartered in the Netherlands. With institutions and affiliates across the UK, Canada,Germany and Singapore the group educates more than 50,000 students from 160 different  nationalities.

UCW delivers programs that provide students with the applied and theoretical basis for success in the workplace and future academic endeavours. Established in 2004, UCW offers quality education with courses that transfer broadly into the public education system. Courses are offered at UCW’s downtown Vancouver campus and online. For more information visit  http://www.ucanwest.ca