Why the Democratic Party is Losing the Election for Obama.

By Jordan Chariton, Special for US Daily Review.

January 28th, 2009-Eight days after the birth of the anti-Obama agenda, every House Republican votes no on President Obama’s $825 billion stimulus proposal.

February 6th, 2009-With the new president in office less than a month, January’s jobs report shows a loss of 598,000 jobs, the worst month of job losses in 35 years, capping off a total of 1.8 million jobs lost in last three months.

February 17th, 2009-President Obama signs the American Recovery and Reinvestment Act.  One Third of the stimulus is tax cuts ($288 billion), with the rest going to infrastructure and state aid to prevent more layoffs. 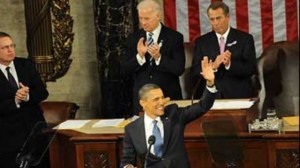 The Republicans take over as the majority party in the U.S. House of Representatives, thanks to a bounce back mid-term election victory.  What ensues over the next year and a half is a transformational journey taking sensible Americans to a confusing, dumbfounding, head scratching political twilight zone.

Your excitement and curiosity getting the best of you?

Welcome to a land where a slow economy featuring inconsistent monthly job GROWTH is much worse than hundreds of thousands of job LOSSES per month.

Soak in the new reality, one where following the worst recession in U.S. history, 4.3 million private sector jobs being ADDED over 27 months is nothing to brag about.  Actually it’s a complete and utter sign of failure for a President who’s “a nice guy who’s just in over his head.”

Enjoy your pit stop at the capitol of this alternate universe, Wisconsin.  There you’ll shake hands with a Governor, whose impressive accomplishment of leading his state to last place in the countries job standings while also conjuring up a non-existent budget surplus leads him to a seven point VICTORY in his recall election (the 30 million from his friends didn’t hurt).

This is the political twilight zone, born on the night of President Obama’s inauguration, by the new 21st century Republican Party, one where Ronald Reagan would be considered a tax and spend liberal.

And although the elephant started the war, the donkey is on the verge of losing it.

If President Obama loses to the weakest Republican presidential nominee since Barry Goldwater, the Democratic Party has only themselves to blame.

Never has the party so favored by the facts, with a President whose actions prevented the nation from falling off the fiscal cliff, allowed the opposition responsible for placing us there come out looking like sultans of sense.

Never has one political party allowed the opposition to spin the facts into fiction, allowed the enemy to re-write economic history, and failed to take advantage of the one thing more important than all the Super Pac money in the world.

Republicans can make Obama their socialist Kenyan born enemy of the capitalistic state boogieman until their red in the face.

From this point forward, Democratic lawmakers, surrogates, and advisors have the choice, and the responsibility, to start fighting harder and smarter in support of a second Obama term.

There can be no more Mayor Booker’s linking vomit with Obama campaign strategies.

Democrats must stop being afraid of mentioning the word BUSH just because Republicans cry excuse. As a matter of fact, they should have W in every sentence.

Ignore the Republican echo chamber deflecting their destruction of the economy onto President Obama, and make sure that on the fence voters remember who left us with a bleeding economy, and how the President who picked up the bag never promised change over night.

Start getting LOUDER AND PROUDER that the stimulus worked, that President Obama saved the auto industry, and oversaw the passing of historic health care legislation that has already helped millions of Americans.

Most of all don’t let Mitt Romney and co. hoodwink America.  No more interviews allowing Republican to scream about big bad “Obama debt” while advocating their usual debt doozies of tax cuts and bloated defense budgets in the same breath.

Enough about Mitt Romney’s “sterling” business record.  The guy made a lot of money, so kudos to him and his car elevator.

No one faults him or Bain Capital for doing what venture capitalists do-make profit for investors and themselves.  The fault comes from painting that as your key to the White House, when making millions in profit has nothing to do with creating millions of jobs.

Speaking of those Romney created jobs, when are the Democrats going to raise the roof DEMANDING documentation for the 10,000…no wait 100,000…oops one million jobs Mitt Romney says he created as a businessman.  I can see the Democratic campaign ad now, with a shout out to Speaker Boehner for the inspiration.

“Governor Romney, where are the jobs?”

And if nothing else, if the Democrats do one thing right, stop this lie dead in its track.

Don’t allow any Republican the right to keep a straight face when calling this President, who took out Osama Bin Laden and most of his army, ended the war in Iraq responsibly and as promised, and has taken away the GOP’s card as the party of foreign policy, weak on foreign policy.

In fairness, there are some Democrats out there doing and saying the right things, like Atlanta Mayor Kasim Reed on June 3rd’s “Meet the Press.”

“These folks have amnesia.  When you talk about Barack Obama’s economic record, he created 4.2 million jobs, 27 straight months of growth.  Folks don’t have any conversation at all in this debate about the two wars President Bush funded and put on the credit card.  They’re not talking about the expansion of health care.  There not talking about the fact that we lost 8 million jobs going into this President’s leadership, and to have an entire conversation without putting those facts on the table is really stunning to me.”

Reed was so clear and unwavering in his support for the President, he did what so few Democrats have done this campaign season.

Reed iced the sound bite cake with this:

“And then not to add, Mitt Romney’s own record, going from 36th to 47th in job creation.  Everything he said about what a wonderful job he would do because of his experience as an executive, he said in Massachusetts, and the fact of the matter is, it didn’t happen in Massachusetts.”

Has he made mistakes?

Have his policies helped prevent a depression and achieve modest job growth with one hand tied behind his back by Republican’s?

This isn’t about being a Democrat versus a Republican.  Neither party is completely right, and President Clinton proved that sometimes the best leaders are somewhere in the middle.

What this is about is the facts.  The numbers.  The indisputable record of progress we are making under President Obama.  Is it good enough?

Will it get better under a second Obama term?

With a comeback of compromise, a lowering of the temperature, and a focus on the country over party:

There can be more change than hope.

Will there be a second term?

Jordan Chariton is a politics, media and culture writer.  He has previously produced and booked at Fox News, Fox Business Network and MSNBC, for both television and web platforms.