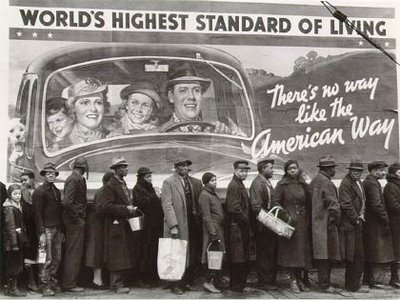 Without people who remember the Great Depression, we all feel like we are now living it.

Recently I had coffee with a friend of mine and we discussed the economy.  This particular associate has some years on me and we both agreed this is the worse economy that either of us have ever seen.  However, as we concurred, we were also both surprised by this reality, because we had witnessed terrible economies.  I remember as a high school student when Jimmy Carter was president standing in a line that went completely around a building to apply for only two cashier jobs that were available.  I also remember gas rationing and all the other policies that made the 70s a very challenging decade in US economic history.

However, I also remember that there were many in the work force at the time that actually lived through and remembered the Great Depression.  My dad told me that, when he was a boy, he use to carry his shoes to school so they would not get worn out too quickly. “Even in the winter” I would ask (he grew up in Illinois)? “Yep, even in the winter, and boy could I run fast,” he would say.  I heard tons of these stories.  Conservation efforts of reusing paper that only had partially been used and turning it into office scrap sheets for notes.  I cannot believe how many I met that had gardens and who actually raised many of the vegetables that they raised.  My dad’s home even had chickens running around in the backyard.  My dad told me they made the terrible mistake of naming a few of them, then it became very difficult to see them on the dinner table.  I was told many stories about families that moved in together in order to save rent.  Some of these barely knew each other.  This was very common during this era (although we are beginning to hear stories such as this today).

The renting population was huge during the Great Depression and many of these families would actually rent month to month, move from their home in the summers and camp during these months.  They would then save up and be ready to pay again for a place when the cold winter months would come.

Business owners were very aware of the chronic double digit unemployment that plagued the era and did what they could to help employees.  I heard many stories of employers who would reduce their employees hours instead of letting any of them go.  Back then 6 day work weeks were common and necessary, many saw their weeks reduced to four days overnight to avoid layoffs

These stories, which often bored those who never lived through such, reminded us that things were not really that bad after all.  Comparatively speaking, the 1970s, which were horrible, were relatively mild compared to the Great Depression.  The Depression began to end 70 years ago as the United States entered World War II.  There are few alive and in the workforce that actually remember those days.  That finds us comparing it with the 1970s and our plight today is actually becoming worse than that era in terms of length of economic decline and depth in terms of the numbers unemployed.  In fact, the Department of Labor has indicated that our period of near ten percent unemployment is the longest since the 1930s.  Those voices that made many say “yeah, right” in the good old days would come in handy today as we try to navigate through the most challenging economy anyone who is still working can remember.