Special for US Daily Review by Levy Economics Institute. 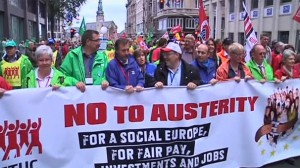 A widespread failure to understand the nature of the debt crisis in Europe is dooming the future of the European Monetary Union (EMU), a new paper from the Levy Economics Institute of Bard College says. In their paper “Confusion in Euroland,” Levy President Dimitri B. Papadimitriou and Senior Scholar L. Randall Wray argue that two significant causes of soaring debt levels are being overlooked: the explosion of private debt in many Western countries prior to the financial crisis, and the decision by Germany to carry a large external account surplus.

“Calling this a ‘sovereign debt crisis’ misses the point,” write Papadimitriou and Wray, who show that, taking the West as a whole, government debt grew from 40 percent of GDP in 1980 to 90 percent today, while private debt grew from over 100 percent to roughly 230 percent of GDP. “Government spending did not cause this crisis, and fiscal austerity for the periphery will not solve it.”

Papadimitriou and Wray conclude that the refusal of political authorities to consider expansionary policies for creditor nations like Germany leaves deflation on the periphery as the only means to restore competitive balance: “Deflation itself imposes huge costs on debtor nations. It increases the value of their nominally denominated debts, making default, and an EMU breakup, more likely. Until policymakers see these facts clearly, no amount of austerity will prevent the collapse of the European project in its present form.”

To read the full text of this policy paper or to learn more about the Levy Economics Institute of Bard College, pleasevisit www.levyinstitute.org.