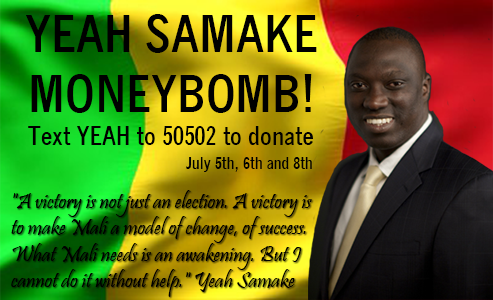 In 2010, at a Mike Lee event (before he became a U.S. Senator), I met a man named Yeah Samake. He was introduced to my husband and me as the next president of Mali. We were able to visit with him for nearly thirty minutes, before we all had to move on. Intriguingly, Samake had attended, and graduated from, Brigham Young University with a Masters in Public Policy, and was associating with American statesmen to learn all he could. Taking all he learned, he returned to Mali and became director of the Mali Rising Foundation which has built twelve middle schools, to date, throughout Mali.

In 2009, Yeah Samake ran for mayor of his home town, Ouélessébougou. Using principles learned in America, Samake took hold of his town’s economic development and rocketed its economic growth from a poor ranking of 699 out of 703, to a current top ten position within one year. Samake also increased Ouélessébougou’s tax collection rate from below 10% to a prosperous 68% by increasing citizen participation through its tribal council system, and by challenging the culture of corruption. His successes earned him the respect of his peers and led to his appointment as vice president of the League of Mayors.

He was awakened one night by his wife, after the coup had taken place, and told to get up and do something about the situation in Mali. So he did, but that is a story for another time and place. The point is, he did not sit quietly in his home despairing for his country. He got up, he walked through the military checkpoints and met with the leader of the coup. He told him he could not rule Mali by force, and the presidential elections had to go forward.

Yeah Samake, with some bumps in the road, is living out the American Dream in the African nation of Mali. One of eighteen children, his father worked night and day to make sure each of his children received a college education. They were raised in poverty, but knowledge was the gift his father gave them. And now, Yeah is running for election for the top position in his nation, and the election is on July 285h. This is the very epitome of the American Dream, but now it has become the Malian Dream.

Why should you help? Mali has been listed as a target by jihadists in the Middle East. Their intention is to instill Sharia Law in this poverty-stricken nation. We in America have a unique opportunity, as the citizens of America, to help a man be elected president in that nation that will effect change for good in the region. Not through force, but through the power of the people. On July 28th, when the corrupt regime will hopefully be replaced, Yeah Samake has pledged to do for Mali what he did for Ouélessébougou, bring prosperity to his homeland.

As America approaches her 237th birthday, we will see fireworks, BBQs, parades and more. And, as we celebrate our liberty, two groups have stepped up to help Mali achieve that same liberty on July 28th when the presidential elections in Mali will finally take place. The Statesmen PAC and STAND4UT are launching a Moneybomb on July 5th, 6th and 8th for Yeah Samake, in a last push.

How can you help? It is perhaps the most simple thing Yeah Samake, STAND4UT, and Statesmen PAC can ask of you: Text the keyword YEAH to 50502 and donate as low as $1.00 and as high as $199. That’s it, nothing more complicated than that.

It isn’t often we can look to one of the poorest nations in the world and know we can help them make that rise from poverty. Yeah Samake is dedicated to that  to raising his people up. As we fight day and night for the American Dream to be restored, we can do this one small thing to help the people of Mali, donate to Yeah Samake.