Simply put, car mechanics is a rewarding hobby. Despite this fact, few people I know actually take the time to put in the work on their vehicle themselves. I’ve decided to compile a list of the five reasons why everyone should be their own mechanic.

Whether you’re doing a full engine rebuild or buffing out a scratch in the paint, there are many benefits to doing the work yourself. Of course it is cost effective to fix your own car in the long run, but there’s also the sense of general satisfaction, an increased pleasure taken in driving, overall improved health of the vehicle and don’t forget the mental health benefits.

A majority of the cost incurred at a mechanic is a direct result of the labor charges. Their expertise is a very specific mixture of critical thinking, a narrow knowledge base and physical-labor skills that come in high demand and low supply. Any economist will tell you that just on paper this will create an economic boon for the party with the know-how. By learning this skill, you will save a ton of money throughout your life. Think of it this way, if a penny saved is a penny earned and a mechanic earns $60 in an hour’s work, you earn $60 per hour that you spend working on your car yourself. That sure beats the heck out of my day job!

During the Summer there is little better feeling than getting into a car on a hot day and turning on the air conditioning. The only thing that’s better is the knowledge that the air conditioning works because you fixed it yourself. There is an undeniable pride that goes along with maintaining and repairing a vehicle by and for oneself. You will be able to proudly discuss the ins and outs of your latest project with the knowledge that you’ve been putting time and energy into real, practical results. Unlike a lot of work, mechanics have a measurable sense of satisfaction and progress. The first time that engine runs after a breakdown as a direct result of your own labor, you’re going to thank me.

Working on your vehicle will do more than just save you money or give you a nice fuzzy feeling; it will actually improve your driving experience. Everything that you do to keep the vehicle running will give you a deeper connection to the vehicle and allow you to drive more harmoniously with it. Ever wonder how hot rods get so souped up and why motorheads drive so often and intently? It’s more than just a mode of transportation for the urban commute to them, and it will be for you too.

By 2010 the highest mileage vehicle stood at a record 2.85 million miles according to the Guinness Book. As incredible as that sounds, it also proves that it’s not impossible as long as a vehicle has a dedicated mechanic. According to the story, the owner and operator of the vehicle used the same mechanic at the dealership that he bought it from, brand new. However, putting that amount of investment into your own vehicle may not be necessarily advisable depending on the current condition, make and model. Ultimately, you’re going to end up making the vehicle run longer as well as smoother, which ultimately will help your wallet again if you ever decide to get rid of it. By doing regular maintenance, you’ll be keeping the value in the vehicle regardless of what the odometer says.

Good for the Brain

As I’ve said before, vehicle mechanics is good for the mind. This is important for people of any age but can be especially important for aging individuals. The way that vehicle mechanics is good for the brain is simple: it’s complicated. Studies have shown that cognitive tasks can delay the onset of diseases like Alzheimer’s and even general cognitive losses that are common with age. Due to neuroplasticity, which basically means brain adaptation, the mind is capable of not only learning but advancing in previously unknown areas, at any age. What we experience as difficulty is simply the sensation that arises when neural pathways are expanding to suit our new needs. This is why students become better at whatever their field of focus is for as long as they pursue it.

Sitting where I am at a ripe young age I’m yearning for a little less mental stagnation. I suppose my car could use an oil change. Honestly, any one of these reasons is good enough to pick up auto mechanics as a hobby. It sure beats just watching another hour of television. 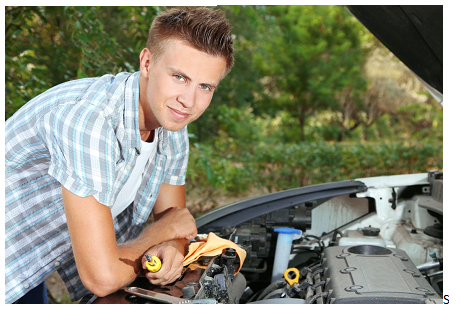