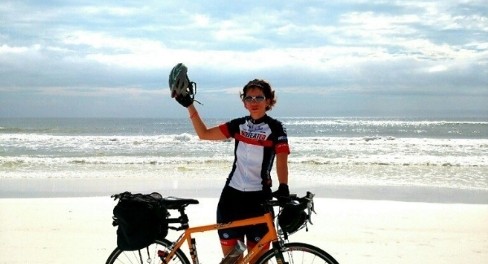 By Patricia Waiwood, Special for  USDR

A woman who was born without a left hand and therefore was denied enlistment in the military will pedal 12 times around Oahu in honor of 12 Marines who were killed in a helicopter crash off Oahu’s North Shore in January.  Her mission: raise $180,000 to sponsor 12 service canines for wounded  warriors.

Patricia Waiwood, a 27-year-old native of Cleveland, Ohio, was denied enlistment in the Marine Corps because she was born with one hand.  Still resolved to make a commitment to the military, she carved out her own branch of service.  Every year since 2014, she has taken cross-county cycling trips alone to raise support for organizations that aid wounded veterans.  The inaugural trip was from California to New York, and the second was from the Ohio Statehouse to Eglin AFB in  Florida.

This year, Patricia will pedal 12 times around Oahu in honor of 12 Marines from Marine Corps Base-Hawaii who were killed in a helicopter crash in January.  The Marines were from Texas,Pennsylvania, Missouri, Alabama, Minnesota, South Carolina,Florida, Massachusetts, and Oregon.  Patricia’s goal is to raise$180,000 to sponsor 12 service canines for veterans with PTSD and/or Traumatic Brain Injury.  The organization that does this work is K9s For  Warriors.

“The unfortunate, staggering fact is, everyday 22 veterans returning from combat take their own lives,” said Rory Diamond, Executive Director, at K9s For Warriors. “The K9s for Warriors training program not only provides our soldiers with a live-saving gift, but it’s also an opportunity for peer to peer support with other servicemen and women who suffer from similar  issues.”

Patricia realizes that this campaign is a huge undertaking, but, as she puts it, “I’ll do whatever success in this campaign requires.  As a soldier at heart, I can’t leave our wounded warriors  behind.”

Donations can be made directly to K9s For Warriors via Patricia’s fundraising page:  https://www.gofundme.com/rideforoursoldiers.

About K9s for Warriors: Founded in 2011, K9s For Warriors is dedicated to providing service canines to warriors suffering from post-traumatic stress and/or traumatic brain injury as a result of military service post 9/11. Our goal is to give a new leash on life to rescue dogs and military heroes, empowering warriors to return to civilian life with dignity and independence.  For more information, visit  http://www.k9sforwarriors.org.