The launch of Mending Wall Day, a day to honor Robert Frost’s Birthday and celebrate the cultural heritage of stonewalls, was announced today in Lowell, Mass., at the headquarters of American Stonecraft. The art studio shares the story of a land that grows rocks and the farmers who battle them. The studio is underwriting the effort from its work adding value to 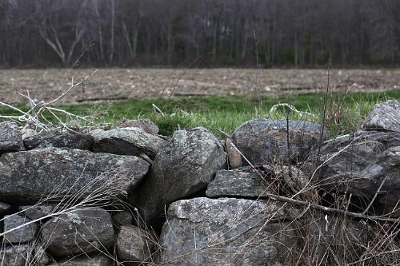 the common fieldstone, traditionally an obstacle to farming the rocky soils of the Northeast. The studio sells freshly tilled fieldstones as fine tablewares; serving dishes, coasters, and bowls to over 500 galleries and stores around the world.

Mending Wall Day will take place on March 26, 2015, in celebration of the birthday of four-time Pulitzer Prize winning poet Robert Frost. It has been estimated that there are more miles of stonewalls in the six states of New England than miles between the earth and moon. These walls were erected because fieldstones are less dense than the soil, and are perpetually pushed upward through the freeze-thaw cycle. Stonewalls were built by hand from these fieldstones and have become a cultural icon of the Northeast. Mending Wall Day seeks to increase cultural awareness of the stonewall by organizing independent community gatherings where neighbors gather to rebuild and tend to fieldstone walls in visible public settings.

“Robert Frost helped define the cultural landscape of rural New England,” according to American Stonecraft’s founder, Gerald Croteau III. A poet born in San Francisco, Frost lived most of his life on farms throughout New England. He wrote poems featuring the fieldstone walls of his landscape, such as one of his most famous titled Mending Wall.

“2015’s vernal equinox will occur on March 20th, so the date of Mending Wall Day is scheduled to take place in early spring when farmers traditionally cleared the winter’s crop of stones and piled them into new walls or added to existing ones. We may not commonly live as rural a lifestyle, but this day can bring us back to our roots, and help bring more awareness to the comforts of modern life and remind us of the chores that no longer need tending to,” says Croteau.

American Stonecraft is contributing $750 to the launch a Mending Wall Day website (www.MendingWallDay.com) and for publicity. The site will list and summarize independently organized Mending Wall Day events across the northeast. The site will be seeking additional sponsors, community event organizers, and writers to continue the day’s efforts.

About American Stonecraft
American Stonecraft is a Lowell, Mass. studio that shares the story of a land that grows rocks, and the farmers who battle them. We do this by making a line of serving wares: coasters, slabs, and bowls, from fieldstones gathered at rocky New England farms. We stamp the underside of each good we make with the name of the source farm where the rock came from. On some goods, we also add a link to our website where there are pictures and information about each of these sourcing farms. Our work is sold by Gift, Home, and Food retailers in 48 US States, Canada, Mexico, and Australia.