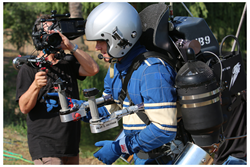 Following on their unprecedented flight around the Statue of Liberty in New York, the JetPack Aviation team will continue their worldwide demonstration tour making several surprise flights over some of Europe’s most iconic  landmarks.

The European tour will begin in Monaco on 29 September and is co-presented by Aerostar Monaco, a distributor of JetPack Aviation’s innovative range of aircraft in Europe. Aerostar Monaco invites the public to witness this historic flight which will depart from the Monaco heliport and soar over the breakwater of Port of Fontvieille. Said Aerostar President Alain Cruteanschii, “After decades of planning and ten years of intense hands-on engineering, and millions of dollars of personal investment, JetPack Aviation co-founders David Mayman and Nelson Tyler have invented what could be considered to be the most technically advanced personal flying machine ever  created.”

Known as the JB-10, the JetPack is unlike any personal flight machine ever designed. The unit is light enough to be carried by one person, small enough to fit in a standard car, and dependable enough to make flights of up to 10 minutes. Reaching speeds of 60mph, the JB-10 has a wide range of potential applications and commercial uses. Says co-founder, world renowned inventor, and Chief Engineer Nelson Tyler, “it would be wonderful if one day our Jetpack opens the door to a vast new industry of affordable personal air transportation with applications for search and rescue, law enforcement, disaster relief and  recreation.”

But flying a personal jetpack is also just plain fun. Becoming a real life Buck Rogers has been a lifelong dream of co-founder and Test Pilot David Mayman, a successful technology and mining entrepreneur who is also an accomplished helicopter and fixed wing  pilot.

Said Mayman after his first untethered free-flight, “it was an incredible experience, one I have been dreaming of since I was a young boy. This flight is the culmination of years of work by Nelson and me. But today is just the beginning. JetPack Aviation is already working on a personal flying machine that will be so safe and simple to operate, it could be used by average commuters in daily life. We have proved that personal flight is a reality, it is here now, and we will stay at the forefront of this exciting new  industry.”

JetPack Aviation has worked closely with the FAA to define a classification for the jetpack, as it is an entirely new form of aircraft. International authorities have shown a keen interest in the field and continue to work closely with the team to ensure safe and successful  flights.

The public is invited to witness three amazing  flights:

Accredited media companies and journalists are invited to contact the JetPack Aviation press office to receive credentials for the reserved press spots at the live flights. Space will be strictly limited. Exclusive flight footage and photos are available from the JetPack Aviation Electronic Press Kit:  http://bit.ly/2chn1II