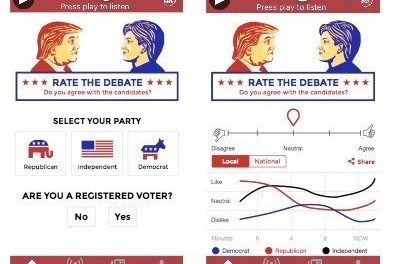 By Futuri Media, Special for  USDR

Futuri Media has released a special live voting feature, exclusively for Futuri Mobile and TopicPulse Social Media clients to use tonight during the Presidential debate. The new feature will provide direct viewer and listener sentiment during the debate, providing audiences and analysts with real-time  feedback.

During all three Presidential debates as well as the Vice Presidential debate, Futuri stations will register live votes from local viewers/listeners on whether they agree or disagree with the politicians on the air. During the debates, viewers and listeners will go to the stations mobile app or website, select their party, identify whether they are registered voter or not, and vote “agree” or “disagree” in real time during the  debate.

Collective data will be displayed in a website voting window as well as a page in the Futuri Mobile app. At the end of each debate segment, participating Futuri client stations will receive summary data and suggested talking points regarding their local audience’s voting  metrics.

“Futuri specializes in digital audience engagement. Our goal is to provide Futuri stations with a unique second-screen experience for their audiences, capture real-time audience sentiment, and support our mobile and TopicPulse partners in producing the very best and most relevant coverage for their local audiences,” said Futuri CEO, Daniel  Anstandig.

With so many undecided voters in contested states, this year’s Presidential and Vice Presidential debates are critical opportunities for the campaigns as well as the media outlets covering them. This year’s debates are anticipating significant audiences, with some predicting that more than 100 million will tune in to view Monday night’s debate. This is especially notable, considering that debates during the last four election cycles have only attracted audiences to the tune of 40-65  million.