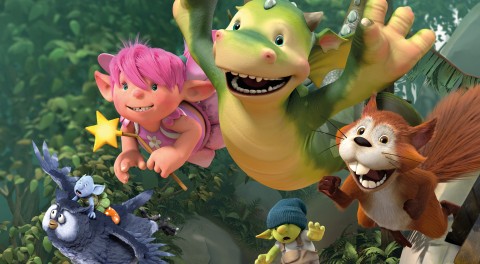 The CG-animated series Digby Dragon (26 half-hour episodes, distributed by Aardman Animations Ltd. and produced by Fizzy Productions Ltd.), airing on Nick Jr. channel, centers on a young dragon named Digby who is learning to fly. Along with his best friends Chips, Fizzy Izzy and Grumpy Goblin, Digby sets off on magical adventures in the colorful and enchanted Applecross Wood. In the series premiere, “Runaway Scottie/Dragon Rock,” Digby gets the chance to be a courageous hero when he rescues Archie from a runaway train. Then, Digby and his friends journey to Peek Rock for a special event. In Digby Dragon, preschoolers will learn about friendship, respect for others and teamwork. The series debuted on Nick Jr. in the U.K. in July 2016, and scored the network’s best weekday launch ever for a new  show.

Trucktown (40 half-hour episodes, produced by Corus Entertainment’s Nelvana), airing on NOGGIN, features a world populated by young trucks, and centers on Flat Bed Jack and his friends Dump Truck Dan, Monster Truck Max and others as they roar, romp and rock their way through town. The show, based on a book series by children’s author Jon Scieszka (The Stinky Cheese Man and other Fairly Stupid Tales), illustrates that preschoolers can find solutions to any problem through game play and  fun.

The second season of Hey Duggee (18 half-hour episodes, produced by Studio AKA for BBC Worldwide), airing on Nick Jr. channel, continues to follow the loveable dog Duggee as he leads The Squirrel Club, a place where kids can take part in activities, learn new skills and earn badges along the way. The series helps teach preschoolers about responsibility, teamwork and how to make good  choices.

NOGGIN is an ad-free, video subscription service that features hundreds of iconic, full-length library episodes, short-form videos, educational content, music videos featuring preschoolers’ favorite Nickelodeon characters, and more, with new content added weekly. Consistently ranking at the top of the charts in the Family and Kids categories, the NOGGIN App is one of the top 10 grossing Kids apps on the App Store, in addition to being the number-one grossing app for Music and Video in the Family Category on Google Play. To date, NOGGIN has 22 library series available, including the recently added classics Miffy and Friends and Teletubbies. Additional titles in the NOGGIN lineup include Blue’s Clues, Go, Diego, Go!, Little Bear, The Backyardigans, Franklin and Pocoyo, among  others.