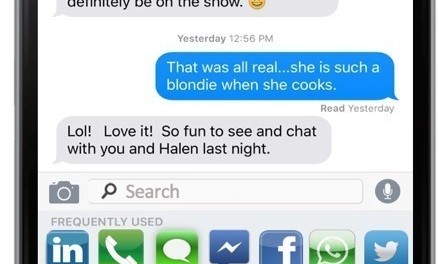 By  Textsoft LLC, Special for  USDR

“Giving smartphone users the power to go beyond traditional internal device tasking (adding pictures, videos, emoticons) to being able to seamlessly incorporate what had once been external tasks or activities – things like advanced experiential messaging with video and music, e-commerce and gifting into texting is the natural evolution to the world’s most prolific communication medium,” stated Gregory Smith, CEO of Textsoft™. “We were fortunately able to foresee and patent an operating system that brings it all together ahead of the competition. We can now be a resource for  the biggest players in the app, fintech and social media  worlds.”

Much like Uber, the company wants to deliver an experience beyond the mobile application. This is a cornerstone principle of their mission. “Enriching messaging was foundational, providing the power to integrate ‘beyond mobile tasking’ into TextOS™ was the challenge; with our operating system and gateway we are providing unprecedented power to application developers, hardware manufacturers, and smartphone users,” stated Scott Jonasz, President of Textsoft.  The software was also designed to allow contextual search, and access to any cloud based utility or content within the messaging menu opening a new frontier for messaging enrichment and productivity  optimization.

Textsoft’s patented Text OS™ beta software and SDK is available to select licensees and will debut commercially in  October.

Additionally, the TextOS™ Suite of multitasking capabilities which are currently built-in to the Applications which can be used with any phone service.  TextOS™ includes functions and benefits like delivering Direct-to-Text™ options which can instantly send prepaid gift cards from the world’s leading brands through barcode and pin technology and can be scanned at the retail location or online direct from the users device. In addition, TextOS can send its patented EMOVICONS™ multi-media movie, music and animations with its “Touch to Cue” technology that streams live into text or instant messages that contain an immediate call to action within the text or instant message, creating the next generation of interactive  emoticons (emoji’s).

Textsoft™ has been awarded several patents and has continuous ongoing patents; Text OS™ 1.0 is the beginning of a Text Control Bar™ which includes revolutionary capabilities such as a Contextual Search Engine Keyboard, “Touch-to-Clip™” technology, and Single Click Injection™. TextOS™ advances the user experience by delivering “a single screen launch-board environment” for all Apps, Content, and Productivity tools.  Textsoft™ plans to make its TextOS™ experience available to billions of users  worldwide.