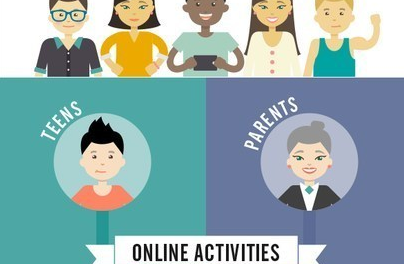 By NCSA, Special for  USDR

A National Cyber Security Alliance (NCSA) study of online safety attitudes and behaviors released today reveals a complex relationship between American teens and parents. The U.S.-based survey, Keeping Up with Generation App: NCSA Parent/Teen Online Safety Survey, which interviewed 804 online teens between the ages of 13 and 17 and a separate sample of 810 online parents, found several signs of an apparent digital disconnect, illustrated by the finding that 60 percent of teen internet users have created online accounts that their parents are unaware of – more than double the 28 percent of online parents who suspect their teens have secret accounts. The study also found a high reliance by teens on peer-to-peer support with 43 percent of respondents saying friends have sought their support because they encountered issues  online.

Co-sponsored by Microsoft, the study was designed to better understand the dynamic online lives of teenagers, including the kinds of problems they face in their digital daily lives and parents’ levels of concern and engagement. It found that as “Generation App” spends much of its day on a phone, device or computer using a wide range of apps and websites, parents are having a hard time keeping up. For example, 30 percent of teens say their parents are “not aware at all” or “not very aware” of their online activities while 57 percent of parents surveyed admit that they are similarly in the dark about what their kids are doing online. Moreover, 28 percent of teens report that their households have no rules when it comes to their use of internet-connected devices, whereas only 9 percent of parents said that was the case in their  household.

In comparison, responses from both parent and teen samples, revealed a significant difference between both groups and their online  perceptions:

The survey also highlights an array of issues teens face online and how they  respond:

“It’s gratifying to see that parents are taking on the challenge of educating their children on the fundamentals of online safety, but this survey shows that it’s time to update our approach to the tech talk,” said NCSA Executive Director Michael Kaiser. “In an era where there’s a new app every day, it’s important that we change the lens of online safety from a tracking and monitoring perspective to a more empowering approach that prepares young people to better respond to the various challenges they will likely encounter in their online lives. Equally critical is helping teens understand that their friends may seek their help with online problems, so they should be capable of offering helpful advice and also ascertaining when a situation requires adult  assistance.”

While teens and parents clearly diverge in a number of areas, they appear to have some consistent priorities and concerns. Both parents and teens also say they believe they have the ability to deal with encountering hateful or violent content effectively. Forty-eight percent of online teens say that if they were directed to online content containing extreme violence or hateful views that made them feel uncomfortable, they are “very confident” they could handle a situation like this on their own, while 21 percent say they are “somewhat confident.” Parents also express relatively high levels of confidence in their ability to help their children deal with this kind of scenario: half (50%) say they are “very confident” and 37 percent said they are “somewhat  confident.”

Moreover, both teens and parents express concerns about exposure to online extremist content. One in four teens (27%) say they are “very concerned” that they might be directed to content about extreme political or religious activities that will make them feel uncomfortable. Similarly, 31 percent of parents said they are “very concerned” about their children being directed to content containing extreme violence or hateful  views.

The protection of personal information also remains a high safety and security concern for parents and teens. When it comes to learning more about internet-associated risks, both groups point to “preventing identity theft” as the number one topic they’d like to learn more about. Second and third on the list are “keeping my devices secure” and “how to identify fake emails, social posts and texts,” respectively – again, indicating a strong desire to learn the basic steps to maintaining online  security.

Methodology
As part of widespread efforts to promote online safety education and awareness for youth, NCSA conducted market research to better understand the potential disconnect between parents and kids regarding their exposure to negative and harmful content online. Using the Zogby panel, NCSA Parent/Teen Online Safety Survey surveyed a sample of 804 online teens ages 13 to 17 and a separate sample of 810 online parents of teens ages 13 to 17 between June 7 and 10, 2016. Based on a confidence interval of 95 percent, the margin of error for both surveys is +/- 3.5 percentage  points.