Like ornaments trimming a tree, smartphones are the decoration that adorn most people year-round. Nearly two-thirds of Americans already own a smartphone1, yet still it is the top gadget on holiday wish lists this year according to an ecoATM survey. Nearly 80 percent of respondents are hoping to receive a smartphone this holiday season, followed closely by a smartwatch (77 percent) and fitness band/tracker (70 percent). Smartphones are playing another role this season with over 21 percent of owners using their device to purchase holiday  merchandise.2 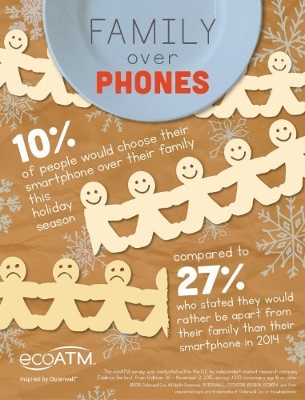 But for as much as people are tied to their phones, the holiday spirit seems to be taking over and creating a little device reprieve. The ecoATM survey also found that an overwhelming 90 percent of Americans would choose their family over their smartphone. This is a hopeful contrast to the findings in ecoATM’s 2014 holiday survey when 27 percent of consumers stated they would rather be apart from their family than their  smartphone.

Whether people are making purchases on their current phones, wishing for a new one or being a Grinch and snuggling up to their device this holiday season, ecoATM remains the go-to for a hassle-free phone trade-in experience. With more than 2,200 kiosks across the U.S., ecoATM offers a convenient and safe way to trade in devices for instant cash that can boost holiday budgets to help cover the gifts on your  list.

Methodology: The research was conducted within the U.S. by independent market research company Edelman Berland on behalf of ecoATM from October 30 – November 2, 2015, among 1,000 consumers age 18 or older. The margin of error for the audience is ±3.1% at the 95% confidence  level.