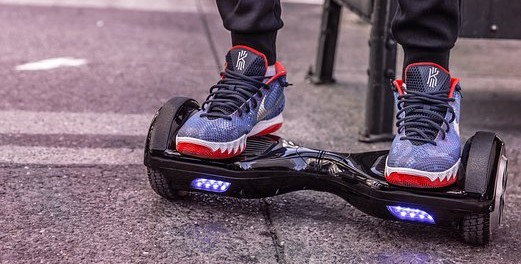 Have you spent any time thinking about hoverboards recently? It seems the hype for these personal electric vehicles died about as quickly as it flared up. One minute every celebrity seemed to punting self-balancing scooters to the kids and the next it was like they never existed.

The hoverboard fall from grace is a somewhat complicated story, but it’s not the end of the story for hoverboards. In the first quarter of 2019 market reports indicated a compound annual growth of 12.3%. By 2024 the market is projected to hit a market value of 1 billion dollars. Clearly hoverboards are anything but dead!

Hoverboards made headlines a few years ago, because they had the unfortunate tendency to explode and burn people’s houses down. This lead to major retailers like Amazon suspending imports and sales of hoverboards. However, that’s not actually the main reason that the US Government ended up temporarily banning their import. It turns out the ban was granted largely thanks to legal intervention by Segway, a self-balancing scooter pioneering. Segway felt that many of these boards infringed on its intellectual property. Specific brands of hoverboard were banned rather than the entire product category, as they were cited for specific patent infringements.

The Coast is Clear, Mostly

Today you are once again free to hop online and buy a hoverboard. Being able to order one is however a different matter than being able to ride one in public. While the State of California has passed specific laws that pertain to hoverboards. For example, they are illegal on planes, require helmets and cannot be operated by riders under 16 years of age.

State-level laws are not the norm however. Where government organs are regulating hoverboard use, it tends to be at the metropolitan level. Which means you need to do some research about local rules for your city or town. Which may all be unique in one way or another.

If you live in New York City, you can ride an electric bicycle, but you are not allowed to ride a hoverboard. It’s unlikely that there will ever be universal national laws for these specific devices, so there will always be some form of making a call to the local council.

So you’ve checked that your city or other local authority allows hoverboards and you’ve got your eye on one for a decent price. So it’s all good, right? Not so fast. You still need to do some homework to ensure that you aren’t getting into something that could cause injury or property damage. You also need to follow guidelines to ride a hoverboard safely.

Reputable retailers will only sell hoverboards that have passed certain safety standards. The most common being either the US or EU safety standards for electronics. Which, among other things, include requirements for all sorts of protection devices that prevent overcharging, overheating and short circuits. Lithium battery technology as a whole is pretty volatile compared to other battery technologies. The only reason we can use them so widely is down to those safety features.

The most basic thing buyers of less well-known hoverboard brands need to do is check whether that safety certification is present or not. It also helps if the batteries used in the device are genuine units from a reputable company like Samsung or LG. Thanks to all the noise around hoverboard battery fires, most products now clearly state who makes their batteries. If that information is missing, it could be a red flag.

Hoverboards have a unique and important role to fill in the spectrum of personal electric transport. They’re much more compact than traditional Segway-type vehicles. Hoverboards are easier to learn than electric unicycles and, unlike bicycles, they can be used indoors. They are ideal for use on college campuses or short trips to school or the local shop. With responsible safe use and ongoing advancement in smart features and battery safety, these personal electric scooters have a bright future.