Breast cancer now represents one in four of all cancers in women worldwide and touches lives every day. While experiences with the disease may vary, the desire to defeat breast cancer is universal. This year, in honor of a shared vision for a world without this disease, The Estée Lauder Companies’ Breast Cancer Awareness (BCA) Campaign celebrates the power of global solidarity by encouraging people around the world to “Take Action Together to Defeat Breast Cancer.” The 2016 BCA Campaign invites women, men and families to draw inspiration from one another and unite in action on BCAcampaign.com and social media, while supporting lifesaving breast cancer research.

Over the past two decades, The Estée Lauder Companies’ BCA Campaign, launched by the late Evelyn H. Lauder, co-creator of the Pink Ribbon and founder of the Breast Cancer Research Foundation® (BCRF), has been a leading voice for breast cancer awareness around the world, igniting a global movement that has helped save millions of lives and fund innovative breast cancer research. Today, The BCA Campaign is active in more than 70 countries and has raised more than $65 million to support global research, education and medical services, with more than $50 million funding 200 BCRF medical research grants worldwide over the past 22 years. These funds help accelerate critical research across wide-ranging areas such as tumor biology, heredity and ethnicity, lifestyle and prevention, treatment, survivorship and metastasis. Around the world, The BCA Campaign partners with more than 60 breast cancer organizations focused on breast cancer research, education and medical services. This year, The BCA Campaign is committed to raising $6 million in support of its mission to defeat breast cancer through education and medical  research. 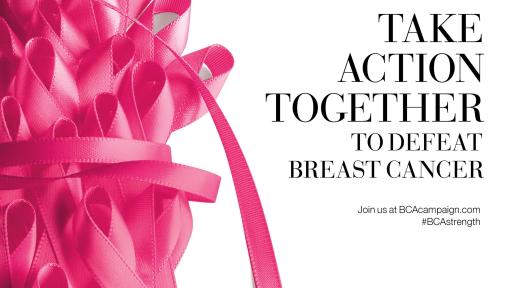 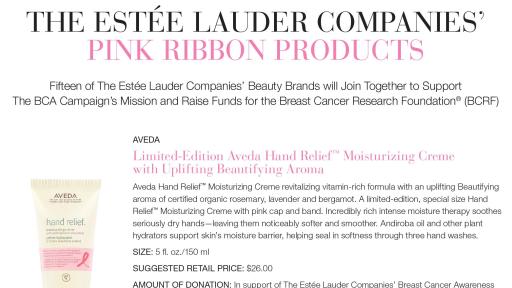 William P. Lauder, Executive Chairman of The Estée Lauder Companies Inc., proudly champions The BCA Campaign’s mission worldwide and continues to honor the legacy of his late mother, Evelyn H. Lauder, stating “Our longstanding commitment to defeating breast cancer is a powerful source of pride at The Estée Lauder Companies—spanning continents, cultures and languages. Each year, our employees, consumers and partners worldwide come together to enhance awareness, raise funds and inspire meaningful action to fight this  disease.”Whether going through a diagnosis, caring for someone who has been personally affected or simply wanting to know a world without this disease, each person has the power to make a difference. This year, The BCA Campaign spotlights the true impact of togetherness by connecting a variety of influencers and contributors to bring their diverse backgrounds and perspectives to its global community. From bloggers, fashion designers and fitness experts to survivors and medical professionals, together, these new contributors will share a range of advice, tips and resources designed to encourage action in ways that inspire, support others and promote health and  wellness.To encourage unique actions that resonate with individuals who have varying connections with the disease, The BCA Campaign’s global website, BCAcampaign.com, is evolving into an editorial destination featuring powerful, fresh content from diverse voices in the breast cancer community. A variety of educational, impactful resources will be brought to life through social and digital, providing ways for people to take action and create meaningful change in their own lives and the lives of others throughout the  year.

Fabrizio Freda, President and Chief Executive Officer, The Estée Lauder Companies Inc., said, “At The Estée Lauder Companies, we continuously strive to have a meaningful impact in the communities where we live, work and have a presence. I am so proud of our Company’s collective efforts around the world, as we continue to elevate breast cancer education and medical research through The BCA  Campaign.”

Elizabeth Hurley, Global Ambassador for The BCA Campaign, stated “Through my travels as The BCA Campaign’s Global Ambassador, I’ve met thousands of people touched by breast cancer and numerous experts who play a role in advancing breast cancer education and medical research. I truly believe there’s strength in numbers and strength in unity. Together, we can take action to defeat this terrible disease that touches so many of  us.”

To participate in The 2016 BCA Campaign, visit BCAcampaign.com and follow on social media @BCAcampaign and #BCAstrength. Together, our actions can bring us closer to a world without breast  cancer.

ABOUT THE ESTÉE LAUDER COMPANIES’ BREAST CANCER AWARENESS (BCA)  CAMPAIGN
The Estée Lauder Companies’ Breast Cancer Awareness (BCA) Campaign is committed to defeating breast cancer by supporting education and medical research. Founded in 1992 by the late Evelyn H. Lauder with the launch of the iconic Pink Ribbon, The BCA Campaign is The Estée Lauder Companies’ largest corporate philanthropic initiative and is active in more than 70 countries. The BCA Campaign has raised more than $65 million to support global research, education and medical services, with more than $50 million funding 200 Breast Cancer Research Foundation® (BCRF) research projects worldwide over the past 22 years. For more information on The BCA Campaign, visit BCAcampaign.com or follow @BCAcampaign on Facebook, Twitter, Instagram and  YouTube.